Fires have killed nine and destroyed almost 10 million acres, an area the size of Japan 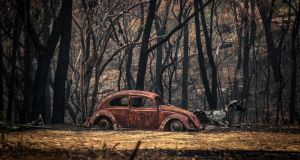 The remains of a car destroyed by bushfires sits near a home in the town of Balmoral on Monday in Sydney, Australia. Photograph: Getty 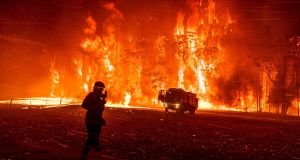 A firefighter records video on his phone of a wall of flames in Orangeville, southwest of Sydney, Australia, earlier this month, 2019. Photograph: New York Times 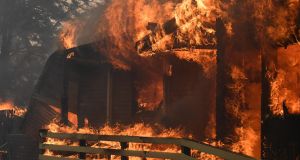 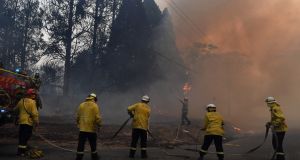 Rural Fire Service crews work to protect a property from a bushfire in Buxton. Photograph: EPA

An Australian volunteer firefighter died on Monday and two others suffered burns after their truck rolled over when it was hit by extreme winds amid raging bushfires.

The firefighters were working on a fire about 70km (45 miles) east of Albury in New South Wales, fire authorities tweeted.

As many as 11 emergency fire warnings were in place in the state of Victoria, where conditions were expected to become extreme overnight, while fires were also threatening South Australia and Tasmania.

Meanwhile, tens of thousands of people were evacuated from parts of New South Wales on Monday as “columns of fire” fuelled by extreme heat and high winds bore down on a popular tourist region in Australia’s southeast.

Wildfires that have plagued the country’s eastern coast for weeks flared again to danger levels in Victoria state’s East Gippsland, an area encompassing two national parks, lakes and coastal plains that is half the size of Belgium.

By late afternoon, officials warned holiday makers to stay off the roads because of thick smoke and unpredictable, fast-moving fires, adding that it was now too late for people who had not left the region to do so.

The state’s emergency management commissioner Andrew Crisp said “columns of fire” were punching into the atmosphere and generating their own dangerous weather systems.

“There’s lightning coming out of these columns,” Mr Crisp told reporters. “It is unpredictable, it’s dangerous out there.”

With some firefronts stretching more than 1,000 kilometers and temperatures reaching as high as 43 Celsius, Mr Crisp said the danger will remain high into the evening.

Bushfires have destroyed more than 9.9 million acres across Australia in recent weeks - an area the size of Japan. Nine deaths have been linked to the blazes.

At the Shady Gully Caravan Park in Mallacoota, a coastal town in east Gippsland, a manager who gave only his first name, Chris, told Reuters that “people are evacuating and they have evacuated all day. They are leaving.”

At the Mallacoota Beachcomber Caravan Park, a woman who identified herself only as Debbie said some people had chosen to stay to help fight the fires.

“The weather is very still, almost like a smoke haze and it’s very, very, hot. No winds,” she said.

Around 100 fires are burning across Australia, the bulk of them in the southeast, across the states of Victoria, New South Wales and South Australia.

But blazes are also threatening lives and homes on the other side of the country - fires in Western Australia, thousands of kilometers away from the country’s east, broke containment lines north of the port city of Albany on Sunday.

The heat wave in Australia’s south even pushed up the mercury in Tasmania, the country’s closest point to Antarctica, to 40.8 Celsius.

That was the hottest December temperature recorded in the state capital city of Hobart, according to the Bureau of Meteorology. - Reuters