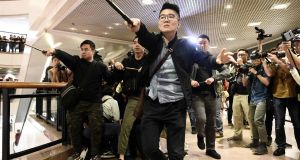 Plainclothes police react as anti-government protesters throw an umbrella at them after a protester (C on ground) was detained in a shopping mall in the Tsim Sha Tsui district of Hong Kong on December 24th. Photograph: Philip Fong/AFP

Hong Kong riot police fired rounds of tear gas at thousands of protesters, many wearing masks and reindeer horns, after scuffles in shopping malls and in a prime tourist district as anti-government rallies escalated into chaos on Christmas Eve.

Protesters inside the malls threw umbrellas and other objects at police who responded by beating some demonstrators with batons, with one pointing his gun at the crowd, but not firing.

Police fired tear gas to disperse protesters who had occupied the main roads and blocked traffic outside the malls and nearby luxury hotels, including the Peninsula, in the Tsim Sha Tsui tourist district of Kowloon.

There was a heavy police presence into the night with hundreds of officers standing guard on the roads as thousands of Christmas shoppers and tourists, some wearing Santa hats, looked on.

Many families with children had congregated in the same area to view the Christmas lights along the promenade, the spectacular backdrop of Hong Kong island on the opposite side of the harbour.

The protests in Chinese-ruled Hong Kong, now in their seventh month, have lost some of the scale and intensity of earlier violent confrontations. A peaceful rally this month still drew 800,000 people, according to organisers, showing strong support for the movement.

Scores of black clad, mask wearing protesters chanted slogans including “Revive Hong Kong, revolution of our time,” and “Hong Kong independence” as they roamed the malls.

“Lots of people are shopping so it’s a good opportunity to spread the message and tell people what we are fighting for.” said Ken, an 18-year-old student.

At one mall in the teeming Mong Kok district, also on the Kowloon peninsula, police used pepper spray to disperse some protesters, according to Cable television.

Around 100 protesters trashed a Starbucks inside another mall called Mira Place, breaking the glass counters displaying pastries and spraying graffiti on the walls.

The coffee shop chain has been a common target of protesters after the daughter of the founder of Maxim’s Caterers, which owns the local franchise, condemned the protesters at a UN human rights council in Geneva.

Demonstrators have previously defaced Starbucks around the city, daubing anti-China graffiti on its windows.

The Civil Human Rights Front, which has organised some of the biggest marches involving more than a million people, has applied to stage another march on New Year’s Day.

Police have arrested more than 6,000 people since the protests escalated in June, including a large number during a protracted, violent siege at the Hong Kong Polytechnic University in mid-November.

Many Hong Kong residents are angry at what they see as Beijing’s meddling in the freedoms promised to the former British colony when it returned to Chinese rule in 1997.

China denies interfering and says it is committed to the “one country, two systems” formula put in place at that time and has blamed foreign forces for fomenting unrest.

Ms Lam has so far refused to grant protesters’ demands which include an independent inquiry into police behaviour and the implementation of full universal suffrage.–Reuters