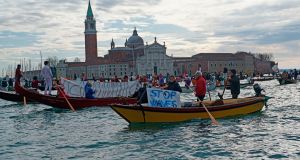 Rowing and sailing boats sail along the St Mark’s basin in Venice, Italy, as Venetians protest against the damage caused by waves created by large motorboats on Sunday. Photograph: Anteo Marinoni/LaPresse via AP

Hundreds of people in small rowing boats protested in front of Venice’s St Mark’s Square on Sunday to denounce what they say is a proliferation of motor boats that have crowded the waters of the lagoon city.

The protesters also took aim at the giant cruise ships that regularly sail close to Venice, a Unesco World Heritage site that has come under increasing strain from rising waters.

Critics say waves created by cruise ships and other large, motorised boats on the canal are eroding the foundations of the city, which regularly suffers from flooding.

The protesters arrived on a flotilla of small, traditional boats, where the rowers stand as they plough through the water.

“Stop the waves, stop the smog,” said one banner flapping in the wind. “Shame on those making waves,” read another in Venetian dialect. “Look out for the waves, they are drowning us,” said a third.

Beloved around the world for its canals, historic architecture and art, Venice suffered a record string of floods in November, which left much of the city underwater and threatened the famed Saint Mark’s Basilica.

The high tides were blamed on climate change, but protesters say local authorities could be doing much more to protect the fragile city by banning big boats.

A decision was taken in 2017 to shoo away the cruise liners but it has yet to be enacted as alternative mooring sites are being developed. – Reuters