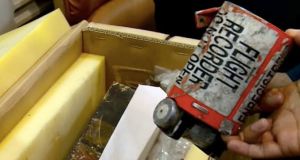 Black box: Canadian foreign minister Francois-Philippe Champagne said he wrote to his Iranian counterpart on Sunday to urge the boxes be sent quickly to Ukraine or France. Photograph: EPA

Iran said on Sunday it was trying to analyse the black boxes of a Ukrainian airliner that its military shot down this month, denying a report that a decision had been taken to send the voice and flight data recorders to Ukraine.

Canada, which had 57 citizens on the flight in which all 176 people aboard were killed, said on Sunday there were still no firm plans for downloading the recorders. Ottawa and other capitals have called for the black boxes to be sent abroad.

The plane disaster on January 8th has heightened international pressure on Iran as it grapples with a long-running dispute with the United States over its nuclear programme and its influence in the region that briefly erupted into open conflict this month.

The military has said it downed Ukraine International Airlines flight 752 in error in the aftermath of tit-for-tat strikes by the US and Iran. But authorities delayed admitting this, prompting days of protests on Iran’s streets.

“We are trying to read the black boxes here in Iran. Otherwise, our options are Ukraine and France, but no decision has been taken so far to send them to another country,” Hassan Rezaifar, a director in charge of accident investigations at Iran’s Civil Aviation Organisation, told state news agency IRNA.

Mr Rezaifar had been quoted by Iran’s semi-official Tasnim news agency on Saturday as saying the black boxes could not be decoded in Iran and would be sent to Ukraine after Kiev’s repeated requests. IRNA also reported on Sunday that the official had made similar comments a day earlier.

It was not immediately clear what prompted Mr Rezaifar to backtrack.

The Boeing 737-800 was en route from Tehran to the Ukrainian capital. Most of those on board were Iranians or dual nationals.

Canadian foreign minister Francois-Philippe Champagne said he wrote to his Iranian counterpart, Mohammad Javad Zarif, on Sunday to urge the boxes be sent quickly to Ukraine or France.

Canada’s Transportation Safety Board said two of its investigators left Tehran on Sunday after a six-day visit during which they examined the wreckage.

Iranian investigators were “co-operative and helpful” but said there were still no firm plans on how and when the black boxes would be downloaded, it said in a statement.– Reuters