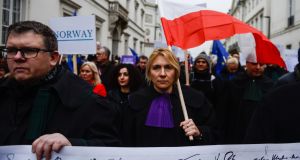 A judge holds a Polish flag during the “Thousand Scarlet Robes March” on January 11th in Warsaw: The PiS party has vowed to press ahead with the legal system reforms. Photograph: Omar Marques/Getty

Poland is heading for a fresh showdown over judicial reform next week after the Senate, the opposition-controlled upper house, rejected government proposals on Friday.

The 100-member Senate voted by 51 to 48 to reject the Bill which the government says is needed to stabilise a legal system.

With a growing number of Polish judges questioning the very legality of the reformed legal system, a leading European human rights body has warned that Warsaw’s proposals endanger the rule of law and will aggravate a schism in the Polish legal system.

Warsaw’s ruling national conservative Law and Justice (PiS) party has vowed to press ahead next week with the latest wave of reforms. It says they are necessary to streamline the courts and increase their democratic accountability by banishing lingering communist-era cronyism.

Since taking power in 2015, PiS has appointed government-friendly judges to control the constitutional court, brought judicial appointments under tighter parliamentary control and created a new body to discipline judges.

Critics see the reforms, which include provisions to allow the justice minister to fire judges directly, as an attempt to bring the courts and judges under political control.

In a November ruling, the Court of Justice of the European Union (CJEU) reminded Polish judges that EU law has precedence over national law. It said it was up to Poland’s courts to decide whether the country’s judicial bodies conformed with the law. In response Poland’s government-critical supreme court declared illegal the appointments and disciplinary bodies.

PiS ignored these rulings and, in response, fast-tracked fresh reforms through parliament in just 24 hours last month, allowing the punishment of judges involved in “political activity”. Additional proposals foresee fines or even dismissal for any judge who questions the legitimacy of judges appointed by government-reformed bodies.

Last Saturday, dozens of judges from around Europe marched through Warsaw to show solidarity with their Polish colleagues and express concern about the rule of law and separation of powers in Poland. On Tuesday, the European Commission asked the CJEU for an injunction to halt operation of the judicial disciplinary body.

Next week, the Polish government is expected to use its majority in the Sejm to overrule the Senate’s rejection of the judicial amendments, allowing it to be signed into law by President Andrzej Duda, the PiS-affiliated head of state.

This in turn is likely to trigger further legal action by the European Commission. Earlier this month, the Council of Europe’s Venice Commission – independent legal experts who advise EU member states on constitutional questions – visited Warsaw on the invitation of the Senate. Government representatives declined to meet the delegation, which included Irish barrister Richard Barrett.

The 14-page Venice Commission report warns of a “risk of legal chaos” through new proposals which could “curtail the freedoms of expression and association of judges”.

The fresh amendments “may further undermine judicial independence”, according to the report, by making it illegal for judges to examine whether other Polish courts are independent and impartial under EU law.