The man shot by Milan police in the early hours of Friday was 'without any shadow of a doubt' the Berlin lorry attack suspect, Italy's interior minister says. Video: Reuters 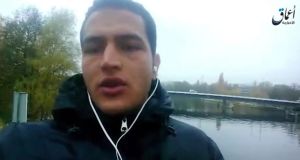 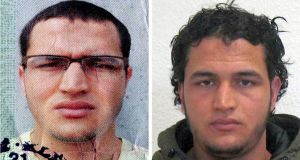 A German police photo shows Anis Amri, who is suspectd of carrying out the Berlin Christmas market attack. Photograph: EPA 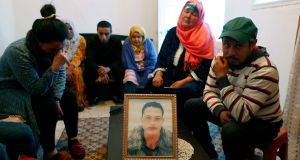 The family of Anis Amri sits around a portrait of him in their home in Oueslatia, Tunisia, on Thursday. Photograph: Mohamed Messara/EPA 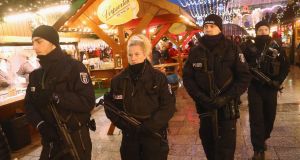 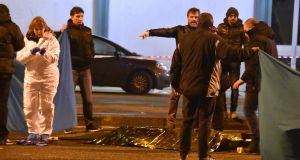 A body is covered in a thermical blanket as Italian police cordon off an area in Milan. Photograph: Daniele Bennati/AP 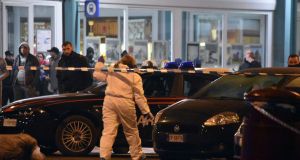 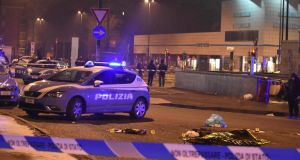 Italian police at the sealed off scene of a shootout in Milan’s Sesto San Giovanni neighborhood. Photograph: Daniele Bennati/AP 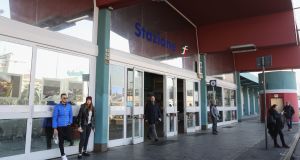 German chancellor Angela Merkel has vowed to boost domestic security and tighten asylum laws, hours after the chief suspect in the attack on a Berlin Christmas market died in a shoot-out in Italy.

Anis Amri, a 24 year-old Tunisian man, died after being shot by a Milanese police officer at 3am, after arriving in the northern Italian city by train via Chambéry in France and Turin.

Amri was the chief suspect for an attack on a Berlin Christmas market just after 8pm on Monday evening in which a truck ploughed through a crowd, killing 12 and injuring 48.

When challenged by the police officers he claimed, in Italian, to be from Calabria in the south, but officers were suspicious and asked him to identify himself.

“Without hesitation he took out a pistol ... and shot the policeman who had asked him for ID,” said Mr Marco Minniti, Italian interior minister, at a news conference.

A second officer shot the Tunisian man twice in the chest and he died ten minutes later at the scene.

Amri’s death came a day after German investigators revealed his fingerprints had been found on the door handle and steering wheel of the lorry that crashed into a Berlin Christmas market, killing 12 and injuring 48 people.

On Friday Ms Merkel thanked Italy and wished a speedy recovery to Christian Movio, the Milanese police officer shot in the shoulder during the standoff.

The death of Amri had ended the “acute danger” facing Germany, she said. Despite the challenges posed by Islamist violence, she insisted that Germany’s “democracy, values and humanity” would prove stronger than the “hate-filled world of terrorism”.

“It is the uppermost priority of this government to protect its citizens,” she said, “and we will do everything humanly possibly to ensure that our state is a strong state”.

Among a “series of questions” requiring answers after the last week were tighter refugee laws and speedier deporation of failed asylum seekers such as Amri, she said.

He swore loyalty to the Islamic State terrorist group and declared his willingness to die for the cause in a video released on Friday but apparently recorded some months ago.

Even after their chief suspect’s death, German authorities said their investigation into Monday evening’s attack - in particular the hunt for accomplices -- will continue.

Investigators are also likely to come under scrutiny to explain overlooked evidence and missed leads.

After his arrival in Germany in July 2015, Amri’s sympathies for Islamic State (also known as Isis) meant German intelligence services classified him as a security threat, one of around 550 such people in the country.

But he was only placed under sporadic surveillance and, following the rejection of his asylum application and a looming deportation, he vanished. He disappeared from view until police found his ID in the cabin of the truck that ploughed into the security market.

On Friday, Moroccan security services said they had warned German intelligence in September and again in October that Amri was planning an attack.

Amri’s mother has said she fears the world will never know why he allegedly committed the atrocity. Nour El Houda Hassani said: “Within him is a great secret. They killed him and buried the secret with him.”

Speaking in his impoverished Tunisian hometown of Oueslatia, she begged for his remains to be brought home. “I want the truth about my son. Who was behind him?”

Amri’s brother Abdelkader wept as he said: “My brother is dead. Bring us his remains, even one of his fingers, and I will put it in my pocket. ... They killed him when he was still only a suspect. Why?”

The attacks have prompted scathing attacks from Dr Merkel’s Bavarian allies - long critical of her liberal asylum policy and given a boost to the far-right Alternative für Deutschland (AfD).

Right wing and populist parties around Europe have seized on the shooting of Amri in Italy to criticise Europe’s open border policy and call for the end of the Schengen system.

The leader of France’s far-right Front National, Marine Le Pen, sought to make political capital from the fact that Amri had managed to travel from Germany to Italy, reportedly via France. Demanding the return of national borders, Ms Le Pen said his journey was “symptomatic of the total security disaster represented by the Schengen area” .

Shortly afterwards, Nigel Farage, the former leader of the UK Independence party (Ukip), also sought to align himself with Schengen critics. “If the man shot in Milan is the Berlin killer, then the Schengen area is proven to be a risk to public safety. It must go”, he tweeted.

Beppe Grillo, the head of Italy’s anti-establishment Five Star Movement, said the shooting proved that the migration crisis was out of control and that it was “crazy” that two Italian police officers had had to risk their lives to deal with a terrorist wanted by half of Europe.

“Italy has become a pathway for terrorists, who we are not able to recognise thanks to Schengen,” Mr Grillo said, claiming that terrorists could cross Europe’s borders undisturbed and that Schengen needed to be reviewed.

The Schengen agreement, which abolished many internal borders separating European Union nations, took effect in 1995 but has come under increasing pressure since the Arab spring in 2011 and subsequent civil conflicts.

Among the Berlin market dead were Dalia Elyakim, a 60-year-old Israeli woman visiting the city, and 31 year-old Italian Fabrizia Di Lorenzo, who lived in Berlin.

Other dead, included a 32-year-old man and 53-year-old woman from Brandenburg, the state surrounding Berlin.

Three of the 12 Berlin market dead still have not been identified, though DNA tests are likely to give final answers on Friday.

Survivors of the attack include a 21-year-old man, identified only as Inaki E from Bilbao, and Richard Ramirez, a 62-year-old who moved from Texas to Berlin a decade ago.

“They told me he is in intensive care and they had to remove a part of his bowel,” Mr Ramirez’s’s brother Armando told US television station KGBT. The fate of the man’s boyfriend has not yet been established.

On Thursday, Chancellor Angela Merkel said she hoped the main suspect for the Berlin attack would be caught.

“In the last days I’m been proud at how calmly most people have reacted to this situation,” she said.

The family of the Polish driver who was apparently killed by Amri has been overwhelmed by offers of support from around the world.

Lukasz Urban (37) was driving from Turin to Warsaw via Berlin when his truck was hijacked on Monday. He was shot shortly after the crash. Given injuries to his body, police believe he struggled with the hijacker to pull the the truck back out of the market and spare further lives.

“We are getting heaps of requests about how to support the family of our colleague Lukas,” wrote Ariel Zurawski, the driver’s cousin and boss, on his Facebook page.