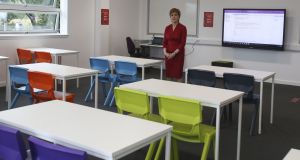 Scotland’s first minister Nicola Sturgeon has apologised to tens of thousands of teenagers whose exam results were downgraded last week and promised urgent changes to their awards.

The first minister attempted to defuse a growing crisis for her government by confirming that her deputy, John Swinney, would lay out proposals to regrade results in the Scottish parliament on Tuesday.

“We accept we didn’t get this right and I’m sorry for that,” Ms Sturgeon said during her regular coronavirus media briefing. She hinted schools would not now have to put in appeals for individual pupils or individual subject awards.

The controversy blew up last week after the Scottish Qualifications Authority (SQA) downgraded 124,000 recommended awards – nearly one-quarter of the total – after using computer models to decide results following the cancellation of all exams during the coronavirus lockdown.

Critics pointed out the SQA had downgraded awards recommended by teachers for pupils from the poorest 20 per cent of areas by more than 15 points, while recommendations for the best-off pupils were downgraded by just under 10 points.

With pupils in Glasgow and elsewhere staging protests, the SQA promised that appeals for pupils applying for universities would be fast-tracked. It then emerged that some Scottish universities had said many courses would be filled up before the SQA had ruled on those appeals.

Mr Swinney faces a vote of no confidence on Tuesday, tabled by Scottish Labour, after insisting last week there was no evidence pupils from deprived communities had been unfairly treated.

The Daily Record disclosed on Monday that at Ms Sturgeon’s former secondary school, Greenwood Academy in North Ayrshire, 40 per cent of recommended awards had been downgraded.

Ms Sturgeon had vigorously defended the process last week, saying the 20 per cent year-on-year increase in grades recommended by teachers was not credible.

She said on Monday she had reconsidered that, and now believed her government had put too much trust in an algorithm, focusing too much on protecting the credibility of the overall system. She said other governments in the UK had taken a similar stance.

She now realised it had failed to understand the significant impact on individual teenagers, and the damage the downgrading had had on public confidence in the Scottish education system.

“That burden has not fallen equally across society,” she said. “Despite our best intentions, I do acknowledge that we did not get this right. I’m not prepared to have this year’s cohort of pupils, particularly from deprived communities, thinking that their hard work at school doesn’t count or the system is determined to be against them.”

While the Scottish Greens and Liberal Democrats welcomed Ms Sturgeon’s apology and urged Mr Swinney to unveil substantial changes, Labour and the Conservatives said the education secretary should resign or be sacked.

Iain Gray, Scottish Labour’s education spokesman, said Mr Swinney had been warned repeatedly over the summer that the SQA’s grading system was flawed, yet had repeatedly defended the policy last week once those warnings were proven correct.

“It is frankly hypocritical for the first minister to apologise today after refusing to accept for over a week that an injustice had occurred,” Mr Gray said. “This apology is more concerned with protecting John Swinney’s job than facing up to the failures of her government.

“A belated and forced apology is not good enough. We need an immediate return to the grades recommended by teachers for those who saw their grades reduced. It’s time pupils and teachers got justice and Swinney got his jotters.”

Jamie Greene, for the Scottish Tories, said the SQA debacle was the latest in a long series of education and social policy failures while Mr Swinney was in charge, including his scrapped education Bill, the policy reversal on named persons, and failing standards in schools.

“This isn’t about one issue. John Swinney’s report card is littered by F-grades every year and confidence in his ability to run our schools has evaporated,” Mr Greene said. – Guardian