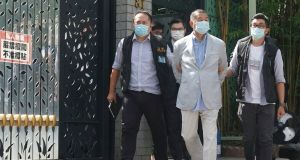 More than 200 Hong Kong police and detectives swooped on the offices of an independent newspaper on Monday and arrested pro-democracy media tycoon Jimmy Lai, part of a wider crackdown on dissent since Beijing imposed a far-reaching national security law on the financial hub.

Mr Lai, whose Next Digital company publishes the fiercely pro-democratic Apple Daily newspaper, was one of nine people arrested on charges of violating the controversial new security law.

Two of Mr Lai’s sons were among those arrested, as was Wilson Li, a freelance journalist with Britain’s ITN and a former member of the now-disbanded student group Scholarism.

Staff at the Apple Daily newspaper livestreamed video footage of police raiding the offices, with officers seen searching cubicles and rifling through files and papers on journalists’ desks.

Officials said the arrests were made on suspicion of fraud and colluding with foreign forces, one of the key offences under the new law, along with secession, subversion and terrorism.

The arrest of the outspoken media mogul is the most high-profile to date under the new law since it was imposed on the city by Beijing at the end of June in response to the huge and often-violent protests that roiled the city last year.

While mainland China and Hong Kong officials said the law would not affect freedoms pledged to Hong Kong under the 1997 handover agreement with the UK, critics say it is a draconian piece of legislation that overnight ended the high degree of autonomy once granted to the territory.

The broadly worded provisions in the law have had a hugely chilling effect on the city’s pro-democracy movement, with Mr Lai describing the legislation recently as a tool to silence critical voices and “a death knell for Hong Kong”.

Long a thorn in Beijing’s side, he has made frequent visits to Washington and last year met US vice president Mike Pence and secretary of state Mike Pompeo to discuss the Chinese Communist Party’s tightening grip on the city.

His actions prompted China to label him a “traitor” and recently the state-run Global Times wrote that his tweets critical of Beijing and the Hong Kong government could be used against him as evidence of subversion under the new law.

“I have always thought I might one day be sent to jail for my publications or for my calls for democracy in Hong Kong,” Mr Lai wrote soon afterwards in an opinion article carried in the New York Times. “But for a few tweets, and because they are said to threaten the national security of mighty China? That’s a new one, even for me.”

As news spread of Mr Lai’s arrest on Monday, democracy activists took to social media to urge investors to buy shares in his Next Digital company in a show of solidarity, with the “purchasing protest” sending the stock surging by 344 per cent at one point in the day.

Last month, Hong Kong officials barred 12 pro-democracy activists from participating in an upcoming legislative election, and then postponed the vote by a year, citing health concerns amid the coronavirus pandemic. Critics claim the move to delay the ballot was political, taken to avoid an embarrassing electoral defeat for the pro-Beijing candidates.

The recent developments in Hong Kong have further strained tensions between the US and China. On Monday Beijing said it would apply sanctions against several US officials, including senators Ted Cruz and Marco Rubio, in response to Washington’s move last week to sanction 11 Hong Kong and Chinese officials it accuses of eroding the city’s political freedoms.