Author of Turkey refugee deal admits it has fallen short 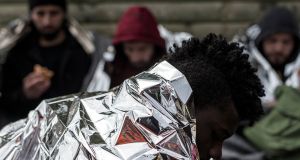 A migrant is covered with a thermal blanket following a sea rescue operation of refugees and migrants near the island of Chios, Greece, in March 2017. Photograph: Alkis Konstantinidis/Reuters

Turkish threats to cancel a controversial refugee swap pact with the EU are a bluff, according the man who devised the plan. But, a year on, Austrian analyst Gerald Knaus concedes that his original idea has fallen short in reality.

The agreement, signed on March 18th last year, was presented as a sustainable answer to the refugee crisis. It gave rise to the hope that Europe could manage the numbers of people seeking asylum while putting human traffickers out of business and ending the human tragedy of mass drownings.

Turkey agreed to take back refugees who reached the Greek islands and, in return, to send Syrians legally to the EU. For its part, Ankara would receive €6 billion in refugee aid from Brussels and secure visa-free travel for its citizens.

A year on, the deal is not quite dead, but it is far from alive either. EU relations with Ankara, on the brink since last July’s failed putsch, are now in meltdown. Post-putsch measures introduced in Turkey have attracted protest in Europe and put visa liberalisation on hold. An estimated 80 people a month are being sent back to Turkey, while up to 30,000 others are trapped in camps on Greek islands and the mainland in what aid agencies describe as “abysmal” conditions.

“Greece has become a testing ground for policies that are eroding international protection standards,” said Oxfam in a joint report with the Norwegian Refugee Council.

This is not how Knaus envisaged it. In August 2015, Knaus, chairman of the European Stability Initiative (ESI), wrote a paper called Why People Don’t Have to Drown in the Aegean. The paper, and its refugee swap idea, caught the eye of the Dutch EU presidency and German chancellor Angela Merkel. The Hague and Berlin pushed it at European level, won over Turkey and signed the agreement a year ago.

With the benefit of hindsight, Knaus concedes that there are weaknesses not in the plan, but in its implementation. EU politicians concentrated too much on Turkey and not enough on Greece, he argues.

“Only a tiny number of the 25,000 people who’ve arrived in Greece since the agreement have filed an application. The procedures are too slow, there’s no resources, it’s an absurd situation,” he says. “We are detaining people in catastrophic conditions.”

He remains hopeful that this year’s Malta plan will help ease those problems, providing extra asylum staff and qualified translators at EU outer borders, with the aim of four-week applications.

A year on, his EU-Turkey plan is still valid, he insists, dismissing criticism that one reason for its failure was that German and Dutch officials, in their zeal to win over Turkey, failed to include other capitals.

“I don’t think the others were that interested,” he says.

Even if the agreement has never worked as envisaged, Knaus argues that it remains a valuable policy instrument given the increasingly strained EU relations with Ankara.

After a series of cancelled political appearances in the Netherlands and Germany, Turkish foreign minister Mevlut Cavusoglu said on Wednesday that Ankara may cancel the refugee deal with the European Union.

This warning, echoed by Turkey’s president Recep Tayyip Erdogan, is dismissed by Knaus as an obvious bluff.

“Turkey didn’t adopt this deal to do the EU a favour but because Ankara realised ‘this is in our interest’,” he says. “They have taken back around 80 people a month and, for that, are getting billions of aid. It’s an unbelievable good deal for Ankara.”

And what of European critics, including aid agencies, who see the agreement as a morally dubious deal that has left the EU at Erdogan’s mercy?

“We can be blackmailed because we have a land border with Turkey, not because of this deal,” Knaus says.

The stakes are high for Merkel – a renewed refugee crisis could endanger her re-election in September – but Knaus doesn’t believe his deal has put her at Erdogan’s mercy.

“I can think of no other visiting leader to Turkey who has said more about press freedom,” he says.

Far from seeing it as a failure, Knaus thinks the refugee agreement can be used as leverage with Erdogan ahead of next month’s referendum in Turkey on constititional changes that would empower the presidency.

The agreement’s visa liberalisation component is frozen over a stand-off on the anti-terror laws introduced by Turkey after last July’s failed putsch. Human rights groups say that Turkey’s extension of remand times without seeing a judge, and introduction of immunity for state officials fighting “terror”, are equivalent to a torturer’s charter.

Given Ankara’s energetic denials of this, Knaus suggests the EU should put it up to Erdogan, linking visa liberalisation to reversal of the anti-terror laws and regular access to Turkish prisons by European monitoring missions.

“If Turkey accepts that, we lift visa restrictions, if it doesn’t implement the proposals, we introduce visa restrictions to Europe once again,” he said. “We would have the Turkish population on our side.”

1 Coronavirus: Donnelly ‘cautiously optimistic’ about Dublin
2 Man with electric scooter who died in Meath was due to get married in the coming weeks
3 ‘Entirely wrong’ to remove pandemic payment from students, says Sinn Féin leader
4 Luggala estate reopens to walkers for first time since March
5 Covid test in use at Rome, Frankfurt, Dusseldorf airports being piloted in Roscommon
Real news has value SUBSCRIBE