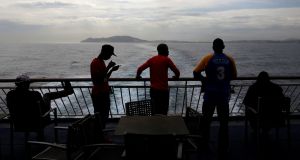 African migrants stand on board a ferry to Algeciras on February 23rd after having waited in a short-stay immigrant centre in Spain’s north African enclave of Ceuta to be transferred to mainland Spain. Photograph: Juan Medina/Reuters

A recent spike in the number of undocumented Sub-Saharan Africans entering Spain suggests that Morocco is following up on a threat to relax its border controls as a reprisal against the EU over a court ruling.

The dramatic rise in the number of arrivals has been seen primarily in the cities of Ceuta and Melilla, which belong to Spain but are situated on the North African coast, bordering Morocco.

On February 17th, 498 migrants reached Ceuta from Morocco by breaching the six-metre-high border fence, in the biggest influx the city had ever seen in a single day. Three days later, another 356 migrants entered the same way. The number of immigrants who had reached Ceuta in the space of 36 hours was nearly half that of the whole of 2016.

“This isn’t a normal number of migrant arrivals,” a Melilla-based member of the AUGC, the Spanish Civil Guard’s members’ representative body, told The Irish Times. “The numbers have risen enormously compared to last year.”

Migrants who reach the two cities are housed in temporary stay centres before eventually being brought to the Spanish mainland.

These developments have come in the wake of a December ruling by the European Court of Justice that has riled Moroccan authorities. The court said that an existing agricultural accord should not apply to the Western Sahara, a disputed territory, because it could not be considered part of Morocco. Since 1975, Morocco has laid claim to the 266,000sq km Western Sahara territory, despite the resistance of the Polisario Front independence group.

“The future of Sahara cannot be decided by a judge,” said Moroccan foreign minister Nasser Bourita, in response to the ruling.

Many saw an outburst by the Moroccan minister of agriculture, Aziz Akhannouch, on February 6th, as a clear hint that his country might use the immigration issue as retribution. “How do you [Europeans] want us to do the job of stopping African – and even Moroccan – emigration if today Europe doesn’t want to work with us?” he told Spanish news agency EFE.

He then asked why Morocco should continue being a “policeman” and added: “The problem of migration is very costly for Morocco and Europe should appreciate its true value.”

There have been several other large arrivals in recent days, with 185 more migrants reaching Melilla and the shores of southern Spain between last Friday and Sunday.

Rafael Morante, a Spanish civil guard officer who was on duty in Ceuta on February 17th, told El País newspaper that his Moroccan counterparts were unusually relaxed that night, when the record crossing took place.

“[The migrants] went right past the two camps belonging to the Moroccan security forces and the police didn’t come out,” he said. Another Ceuta-based civil guard, Omar Mohamed, said the intensity of Morocco’s vigilance had “dropped considerably”.

However, Madrid has denied that Morocco has relaxed its border controls, insisting the increase in numbers is coincidental. “Morocco is cooperating in an impeccable way in regulating these migratory flows,” Spain’s foreign minister Alfonso Dastis said when asked about the issue last week. “Naturally there are spikes and troughs and a lot of people are waiting to cross.”

Spain and Morocco work together closely on migration control, both along the land borders of Ceuta and Melilla and by patrolling the Mediterranean to intercept migrants attempting to reach Spanish soil by sea. In February 2014, 15 Sub-Saharan migrants died in the water while attempting to swim round a border fence separating Morocco and Ceuta. Spanish civil guards who fired rubber bullets from the shore when the migrants were arriving are being investigated.

The two countries have a long history of economic and security ties. They co-operate to combat jihadism, with Moroccan agents reported to be operating in Spain to investigate compatriots with links to terrorism.

There are believed to be precedents for Morocco using the flow of migrants as leverage. In August 2014, the Spanish Civil Guard intercepted the yacht of Morocco’s King Mohammed VI in waters off Ceuta, much to his annoyance. Many observers drew a link between that incident and the arrival of 1,200 migrants in Spain from Morocco in the following days.

The Polisario Front accuses Morocco of systematically using the migrant issue to pressure Spain and the EU. In a statement, the organisation warned that “if they turn a blind eye to this blackmail, it will mean the loss of credibility of the EU and its institutions.”