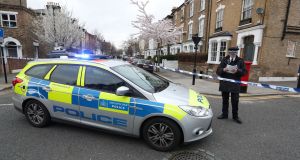 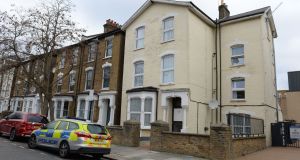 The scene in Wilberforce Road, near Finsbury Park, in north London after a one-year-old boy died and his twin sister was left in a critical condition in a flat. Photograph: Victoria Jones/PA Wire

Murder detectives are urging the UK public to help trace a man after a one-year-old boy died and a girl — believed to be his twin sister — was critically injured.

Scotland Yard said it is of “paramount importance” that Bidhya Sagar

Das (33) is found following a “domestic incident” at a flat in Wilberforce Road, near Finsbury Park, north London.

Both toddlers were discovered with critical injuries at the address on Saturday night and were taken to an east London hospital, where the boy died in the early hours of Sunday morning. Det Chief Inspector Dave Whellams, of the Metropolitan Police, said

Mr Das was at the flat shortly before the children were found but left before emergency services were called. He has not been since. “As the hours pass the need to locate Bidhya Sagar Das becomes more pressing,” Mr Whellams said. “He may have approached friends or family in the aftermath of the incident and I am specifically appealing to these people to come forward.” A murder investigation has been launched.

Witnesses heard a woman shouting for help on the street outside and later saw two children being carried out of the property.

Mihai Manea (29) who lives on the second floor of the building, said the children were twins and lived on the top floor with their Romanian mother and Indian father.

The father worked at the nearby Pembury Hotel as a receptionist, where Mr Manea also works, until a few days ago, he said.

A woman living opposite the building, who gave her name as Gui Gui, said she heard a woman shouting late last night and opened the window to offer help.

“I was watching TV,” she said. “I heard someone was shouting.

“She kept on shouting. I do not know what she was shouting.

“I opened the window and I asked her ‘Can I help you, can I call the police for you?’

She later saw two young children being carried out of the building, with one being held very close to a member of the emergency services.

Mr Menea described the mood inside the property as “tense”.

“It’s really tense,” he said. “There’s police coming and going all the time.”

Park. Next of kin have been informed but formal identification and a post-mortem examination are yet to take place.