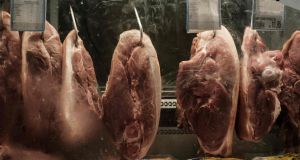 Beef displayed at a supermarket in Rio de Janeiro, Brazil, on Friday. Brazilian police raided the premises of global meatpacking companies JBS SA and BRF SA on Friday, as well as dozens of smaller rivals, in a crackdown on alleged bribery of health officials that could threaten $12 billion in annual exports. Photograph: AFP/Getty Images

Brazilian police raided the premises of global meatpacking companies JBS SA and BRF SA on Friday, as well as dozens of smaller rivals, in a crackdown on alleged bribery of health officials that could threaten $12 billion in annual exports.

The probe, known as “Operation Weak Flesh,” found evidence of meatpackers bribing inspectors and politicians to overlook unsanitary practices such as processing rotten meat and shipping exports with traces of salmonella, police said.

“We’ve never seen a scandal like this in the sector ... It’s horrifying,” said Alex Silva, a livestock analyst with Scot Consultoria. “This stains the entire system that Brazil has spent years building.”

Martin Kenny, Sinn Féin’s spokesman on agriculture, food and the marine, says the investigation highlighted the shoddy standards and produce against which Irish farmers must compete and called for a halt on Brazilian beef imports to Europe.

“The Minister for Agriculture Michael Creed must immediately look for a halt to Brazilian beef imports to Europe. The quality of Irish beef produced from grass-fed, free-roaming cattle, bred on family farms, to the highest standards should not be forced to compete with produce from countries where standards are non-existent in comparison,” he said.

Brazil exported $6.9 billion of poultry and $5.5 billion of beef last year, according to industry groups, as producers ramped up shipments to China and started sending fresh beef to the United States.

Police said they arrested three BRF employees and two from JBS in Friday’s raids, as well as 20 public officials.

JBS said in a securities filing that three of its plants and one of its employees were targeted in the probe, but its senior executives and headquarters were not targeted. The company said it followed rigorous quality standards and sanitary regulations.

BRF also said it followed industry regulations and was cooperating with authorities in the investigation.

The ruling by federal judge Marcos Silva also included transcripts of BRF government relations executive Roney Nogueira allegedly discussing bribery of health inspectors, including one called on to help avoid the closure of the same plant.

Baldissera, Nogueira and Rodrigues could not be reached for comment.

Eumar Novacki, the ministry’s executive secretary, said there was some concern that other countries would begin blocking shipments of Brazilian meat. Agriculture minister Blairo Maggi will meet on Monday with foreign ambassadors to allay concerns.

Sergio De Zen, a livestock expert at the University of Sao Paulo, said other countries may be eager to block Brazilian exports in the fiercely competitive protein market.

“But the impact will not be as big as it would be if another country had discovered this problem,” he said. “It is Brazil itself that is revealing this.”

United States food safety body FSIS said it was in contact with Brazil’s government and monitoring the situation. It said food supply in the US was safe due to a re-inspection system applied to all imported meats.

The food industry investigation is the latest in a string of corruption investigations in Brazil, as a tougher judiciary takes on cozy relations between the government and powerful businesses, backed by public outrage during a deep economic slump.

After investigations into political kickbacks on public works and oil and gas contracts, Friday’s investigation struck at the heart of the booming agricultural sector, one of the few bright spots in Brazil’s economy and a major source of exports.

Police said there was evidence that meatpackers falsified documentation for exports to Europe, China and the Middle East.

Judge Silva wrote in his ruling that employees of some meatpackers, including BRF, arranged bribes and favours for inspectors ranging from political donations and favorable bank loans to small bribes including hams and other meat products.

In some cases, those inspectors would then allow employees of the meatpackers to enter government offices, access computers and issue their own export certificates, investigators said.