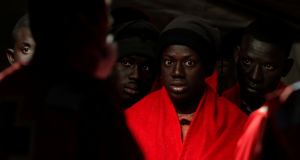 Migrants, who were part of a group intercepted aboard a dinghy off the coast in the Mediterranean sea, after arriving on a rescue boat at a port in Malaga, southern Spain. Photograph: Reuters 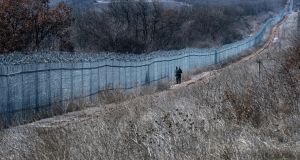 Bulgarian border police patrolling at the Bulgaria-Turkey border near the town of Lesovo. Photograph: Getty Images

European countries have accepted less than 10 per cent of the 160,000 refugees they promised to move to safety from unsanitary and cramped camps in Italy and Greece, leading the European Commission to warn it will “accept no more excuses”.

Just two member states, Malta and Finland, have met their resettling obligations under the relocation scheme that will close in September.

During a press conference in Brussels, commissioner for migration Dimitris Avramopoulos warned that infringement proceedings against member states, including huge daily fines, could soon be levied.

He added that the obligations on countries to take people in would continue beyond the close of the scheme in September, describing it as akin to an “outstanding bill”.

Mr Avramopoulos said: “I want to be clear. There are no excuses for the member states not to deliver. It’s possible . . . to relocate all these from Italy and Greece by September. It entirely depends on the political will and perseverance of member states to make it happen.”

Mr Avramopoulos told reporters: “The commission will not hesitate to make use of its powers under the treaties . . . So far infringements proceedings were not an option. We tried to convince member states to do their duty. But if it is the case [that no progress has been made] in the future, infringement proceedings might be an option.”

Member states were also called upon to support the new European Border and Coastal Guard Agency, and improve their performance in returning those who have illegally sought to settle in the EU. Among the commission’s suggestions was that member states shorten deadlines for appeals, and systematically issue return decisions that do not have an expiry date.

The commission’s first vice-president, Frans Timmermans, said in a statement: “To improve our management of migration we need to continue to implement our comprehensive approach – from relocation and resettlement, to the operationalisation of the European Border and Coast Guard and through continued engagement with Turkey.

“All these measures have the principle of solidarity and fair sharing of responsibility at their core – a principle that binds each member state. The European council offers an opportunity to review our achievements so far and determine how our common decisions and commitments can be fulfilled without delay.”

The commission said the EU-Turkey deal, under which Turkey acts as a buffer to those seeking to settle in the bloc in return for economic aid, was working well a year into its operation.

Daily crossings from Turkey to the Greek islands have gone down from 10,000 people in a single day in October 2015 to 43 a day currently, with overall arrivals dropping by 98 per cent.

The EU member states have also been better in resettling refugees from outside the bloc. Under the EU-Turkey deal, it has been agreed that for every Syrian refugee on the Greek islands returned to Turkey, in exchange, a Syrian asylum seeker in Turkey is found a home in Europe.

A statement from the commission said: “Member states have provided safe and legal pathways to 14,422 persons so far, over half of the agreed 22,504 under the EU resettlement scheme. This includes the resettlement of 3,565 Syrians under the EU-Turkey statement.”