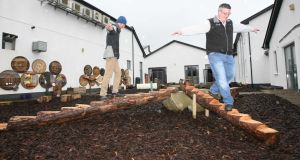 Davy Walsh and Aodán Conneely, from GMIT Mayo, trying out the play area which was built by students from donated and upcycled materials. Photograph: Brian Farrell 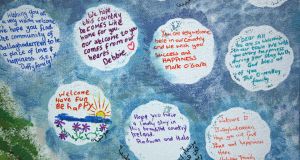 The Welcome Wall in the lobby of the former hotel where refugees will live. Photograph: Brian Farrell 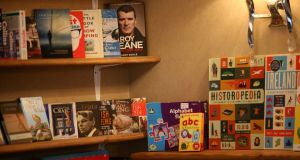 The new library at the former Abbeyfield Hotel in Ballaghaderreen, Co Roscommon, where Syrian refugees will be housed. Photograph: Brian Farrell 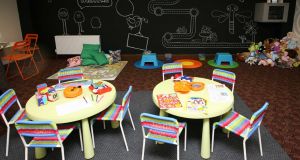 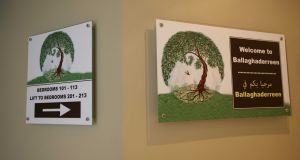 When a group of Syrian men, women and children arrive at a former hotel in Ballaghaderreen next week they will be greeted by welcoming messages from the local community as well as a link to loved ones left at home.

They will also probably be met by a lively cat called Rusty, who arrived as a stray with those working on the former Abbeyfield hotel and is now regarded by staff as a mascot.

To the left of the lobby is a “welcome wall”, an art installation covered with messages, many transcribed into Arabic, left by people from Roscommon and further afield.

On the right is an internet hub, a bank of six computers , which Jacqueline Mullen, manager of the emergency reception and orientation centre, says will be the refugees’ link to home.

The Syrian families had been expected tomorrow but all Ms Mullen will say now is that the first group – believed to comprise 26 men, 18 women and 35 children – will be in the town within the next 10 days.

There will be no fanfare, she insists, as these people will probably need “quiet time” to recover from the ordeal they have been through.

There were still builders in the former four-star hotel at the weekend, putting finishing touches to a block that includes a classroom, health clinic and laundry.

“We are nearly there. It’s all hands on deck,” said Ms Mullen, a former hotel manager. She is determined to create a “safe and happy place” for her guests and is getting help from several sources.

Book shops have made donations, and books in Arabic keep arriving at the centre courtesy of people who ordered them online.

“We also have Arabic television channels,” said Ms Mullen, who had been keen to find ways to make the families feel at home.

Chef Ali Derazzi, from Casablanca in Morocco, will prepare halal meals for the families.

He speaks Arabic, which will make him a key member of staff for adults who will initially speak little English.

“We have 15 staff at the moment, all local except for myself and Ali, and this will probably rise to 20,” said Ms Mullen.

Debbie Beirne, co-ordinator of the Welcome to Roscommon movement, which has been collaborating with all the State agencies involved in the project, estimated that €10,000 of toys and equipment had been donated.

“Apart from the playroom, we have another room full of teddies and toys which we can use at Christmas, birthdays and other occasions,” she said.

“You’d like the children to be able to lose themselves here, to get some respite from whatever trauma they have been through,” says lecturer Davy Walsh.

Mary Gallagher, who runs a clothes shop in the centre of Ballaghaderreen, says she has had mostly positive feedback after her compassionate views on the refugee arrivals became an internet talking point.

“Look what is happening all over the world. Look at Brexit. We don’t even know what Brexit will do to us.”

Sinn Féin councillor Michael Mulligan, who runs a shop in the town, has some concerns about a lack of services for the new arrivals.

“Everything will be top class up there [in the centre] but what will they do?” he asked.

“There will be 80 more arriving soon and eventually there will be 250 and I think maybe that is too many for a small town.”