Maureen Dowd: Instead of growing up in office, Trump is regressing

Everyone is tiptoeing around the mad king in his gilded, sparse court 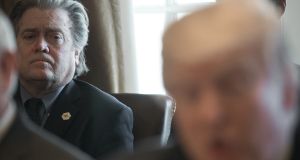 Senior White House adviser Steve Bannon listens as US president Donald Trump speaks to the press before he meets with his cabinet in the White House. Photograph: Nicholas Kamm/AFP/Getty Images

It’s not unknown, of course. In ancient Egypt, there was the symbol of the ouroboros, the snake that eats its own tail. Nerve-addled octopuses sometimes consume their own arms.

But we’ve never watched a president so hungrily devour his own presidency. Soon, there won’t be anything left except the sound of people snickering.

Many voters who took a chance on the property mogul and reality TV star hoped he would grow more mature and centred when confronted with the august surroundings of the White House and immensity of the job. But instead of improving in office, Trump is regressing. The office has not changed Trump. Trump has changed the office.

He trusts his beliefs more than facts. So many secrets, so many plots, so many shards of gossip swirl in his head, there seems to be no room for reality. His grandiosity, insularity and scamming have persuaded Trump to believe he can mould his own world. His distrust of the deep state, elites and eggheads – an insecurity inflamed by Steve Bannon – makes it hard for him to trust his own government, or his own government’s facts.

Angela Merkel did not get a surprise shoulder squeeze from this president. He ignored the chancellor’s request to shake hands. But Merkel still looked jittery. Many who meet with Trump – from foreign leaders to our own lawmakers – look like cats on a hot stove.

One Democratic senator told me he was determined not to smile in a session with the president in case Trump suddenly said something offensive or batty while the senator was politely grinning for the cameras.

Everyone is tiptoeing around the mad king in his gilded, sparse court. His lieges make fools of themselves trying to justify or interpret his transcendentally nutty tweets and wilfully ignorant comments. For two weeks, he has refused to back off his unhinged claim that his predecessor tapped his phones during the election.

According to CNN’s Jeff Zeleny, Trump got furious reading a Breitbart report that regurgitated a theory by conservative radio host Mark Levin that Barack Obama and his allies had staged a “silent coup”.

It is surpassingly strange that the president would not simply pick up the phone and call his intelligence chiefs before spitting out an inflammatory accusation with no proof, just as it was bizarre that Trump shrugged off the regular intelligence briefings after he was elected. He preferred living in his own warped world.

Sean Spicer offered a shaky Jenga tower of media citations to back up the president, including the contention of Fox’s Judge Andrew Napolitano that Obama had used GCHQ, a British intelligence agency, to spy on Trump. In a rare public statement, the GCHQ called the claim “utterly ridiculous”.

Fox News also demurred, with anchor Shepard Smith saying it “knows of no evidence of any kind that the now president of the United States was surveilled at any time, in any way. Full stop.”

Even Devin Nunes, chairman of the house intelligence committee, gave up the Sisyphean effort of defending Trump’s tripe. He said that if you took Trump’s remarks “literally” – as we expect to do with our commander-in-chief’s words – “clearly the president was wrong”.

Asked by a German reporter about GCHQ rubbishing the wiretapping claims, Trump was dismissive. “All we did was quote a certain very talented legal mind,” he said. “You should be talking to Fox.”

Trump’s aversion to veracity is exacerbated by his inner circle of sycophants and conspiracists. As far as Trump is concerned, his budget and health care plan are going great, when everyone else in Washington is averting their eyes.

In a Wall Street Journal piece, Bannon said his anti-elitist worldview was shaped by his father’s decision during the financial crisis in 2008 to sell his AT&T stock, at a loss of more than $100,000. Marty Bannon, who started at AT&T as a lineman, got spooked by Jim Cramer’s advice on the Today show to take “whatever money you may need for the next five years” out of the market.

Even though one son, Steve, was a banker at Goldman Sachs and another son had an investment background, Marty Bannon did not consult them or a financial adviser until the sale was completed. He preferred, like Trump, to get crucial information from TV pundits and eschew the experts in his own circle who might have told him that selling during panics is not wise and that having one stock in an undiversified portfolio is not smart.

“Everything since then has come from there, all of it,” Steve Bannon, the multimillionaire architect of Trumpworld, said of the stock sale. So, essentially, because Bannon’s father made a bad, hurried financial decision based on watching TV, we now have to slash Meals on Wheels, Big Bird, the arts, after-school programmes, health insurance, immigration from Muslim countries, climate change research, diplomats and taxes for the rich.

Maybe if these elites-pretending-not-to-be-elites deigned to talk to some knowledgeable elites in government once in a while, they might emerge from the distorted, belligerent, dystopian, Darwinian, cracked-mirror world that is alarming Americans and our allies.

They might even stop ripping off the working class people they claim to be helping.