The Turkish Coast Guard rescue 15 people in the Aegean Sea 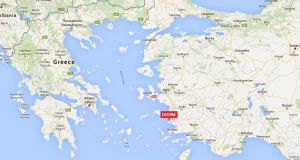 The Turkish Coast Guard recovered 18 bodies in the Aegean Sea near the town of Didim.

At least 18 people attempting to reach Greece drowned after their boat sank off the Turkish coast on Sunday, the state-run Anatolian Agency reported.

The Turkish Coast Guard, using speedboats and a helicopter, rescued 15 people and recovered 18 bodies in the Aegean Sea near the town of Didim, it said.

Efforts continue to find more victims, whose nationalities were not given.

Turkish Prime Minister Ahmet Davutoglu travels to Brussels on Monday for an emergency summit with European Union leaders to tackle illegal migration to member states, much of which occurs through candidate country Turkey.

A million people reached Europe through illegal routes in 2015, many fleeing economic and political turmoil in the Middle East, north Africa and Asia. Most of them came through Turkey, which borders Syria, Iran and Iraq.

So far this year, 135,000 migrants have reached Europe, 126,000 via Turkey, and 418 have died, including 321 on the so-called eastern Mediterranean route from Turkey to Greece, the International Organisation of Migration said on March 4th.

The EU has offered Turkey €3 billion to do more to stop migrants from attempting the perilous journey.