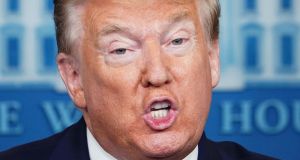 US president Donald Trump had claimed in tweets that mail-in ballots would be ‘substantially fraudulent’ and result in a ‘rigged election’. Photograph: Mandel Ngan/AFP via Getty

US president Donald Trump threatened to “strongly regulate” or close down social media companies, as he reacted furiously to Twitter’s move to label his tweets with a fact-check warning for the first time.

The social media company added a link to two tweets posted by the president on Tuesday in which he claimed that postal voting leads to election fraud. “Get the facts about mail in ballots,” the link reads, redirecting users to information about postal voting, including articles from CNN, the Washington Post and other sources.

The unprecedented move by Twitter to fact-check the president follows widespread criticism that the social media company has allowed Mr Trump to use the platform to publicise unsubstantiated and offensive content to his 80 million-plus followers.

However, Twitter refused to take action on tweets posted by Mr Trump over the last ten days in which he alleges that former Congressman and TV host Joe Scarborough was somehow involved in the death of a former employee, Lori Klausutis, in 2001.

This is despite the fact that the widower of the deceased woman wrote to Twitter chief executive Jack Dorsey last week urging him to intervene, and criticising the president’s promotion of an unfounded conspiracy theory. However, Twitter said the posts did not violate its terms of service.

Mr Trump doubled down on his unfounded allegations against Mr Scarborough on Wednesday .

“Psycho Joe Scarborough is rattled, not only by his bad ratings but all of the things and facts that are coming out on the internet about opening a Cold Case. He knows what is happening!”, he tweeted. He also discussed the issue during a press conference in the White House Rose Garden on Tuesday evening. “I hope somebody gets to the bottom of it,” he said, describing the case as “a very suspicious thing.”

Several Republican members of Congress called out the president for promulgating the conspiracy theory. Liz Cheney, a Republican member of the House of Representatives and usually an ally of the Mr Trump’s, said: “I do think the president should stop tweeting about Joe Scarborough. We’re in the middle of a pandemic. He’s the commander in chief of this nation. And it’s causing great pain to the family of the young woman who died.”

Republicans feel that Social Media Platforms totally silence conservatives voices. We will strongly regulate, or close them down, before we can ever allow this to happen. We saw what they attempted to do, and failed, in 2016. We can’t let a more sophisticated version of that....

.@Twitter is now interfering in the 2020 Presidential Election. They are saying my statement on Mail-In Ballots, which will lead to massive corruption and fraud, is incorrect, based on fact-checking by Fake News CNN and the Amazon Washington Post....

....Twitter is completely stifling FREE SPEECH, and I, as President, will not allow it to happen!

But while Twitter has refrained from taking action on the tweets concerning Ms Klausutis’s death, its decision to add a warning to two of the president’s tweets on postal voting infuriated Mr Trump, who accused the social media platform of stifling free speech.

“Twitter is interfering in the 2020 Presidential Election. They are saying my statement on Mail-In Ballots, which will lead to massive corruption and fraud, is incorrect, based on fact-checking by Fake News CNN and the Amazon Washington Post,” he tweeted. “Twitter is completely stifling FREE SPEECH, and I, as President, will not allow it to happen!”

While Mr Trump is arguably the platform’s most high profile user, the president and his Republican allies have long accused social media companies of having a liberal bias.

Nonetheless, it was unclear what power the president has to curb the work of social media giants, though Congress has been increasing its regulatory oversight of companies like Facebook and twitter since the 2016 election.

“There is NO WAY (ZERO!) that Mail-In Ballots will be anything less than substantially fraudulent. Mail boxes will be robbed, ballots will be forged & even illegally printed out & fraudulently signed,” he wrote in one of the tweets, referring to California’s decision to send postal ballots to voters. “This will be a Rigged Election. No way!”

This is not the first time that Mr Trump has falsely claimed that postal voting leads to election fraud. Last week he threatened to withhold federal funding from Michigan and Nevada following moves by state officials to increase provision of absentee ballots for eligible voters in those states.

The issue is particularly relevant in this election year as more states expand voting-by-mail due to the coronavirus pandemic. Mr Trump’s suspicion of absentee voting reflects a long-held perception by many Republicans that postal voting benefits Democrats by increasing turnout.

Mr Trump’s row with Twitter could set up a new front in the battle between US regulatory authorities and social media giants less than six months before an election.

Facebook, in particular, has been widely criticised for accepting Russian-paid ads designed to divide the American electorate in the run-up to the 2016 presidential election. Facebook and Twitter have both implemented changes ahead of November’s election.

Meanwhile, Mika Brzezinski, the wife of Mr Scarborough and his co-presenter on Morning Joe, a popular breakfast show for political watchers, appealed directly to Mr Dorsey to remove the tweets that suggested her husband’s involvement in the death of his former aide, Lori Klausutis.

Ms Klausutis, then 28, died in 2001 when she collapsed in Mr Scarborough’s office due to a heart condition.

In a letter seen by the New York Times, her widower Timothy pleaded with Twitter to intervene, noting that Mr Trump’s eldest son had also used Twitter “as the means of spreading this vicious lie.”

“I’m asking you to intervene in this instance because the president of the United States has taken something that does not belong to him — the memory of my dead wife — and perverted it for perceived political gain.”