Will the bise cease? Pandemic imperils the very French kiss

Paris Letter: Cheek-kissing is a social minefield in France. Not everyone would miss it 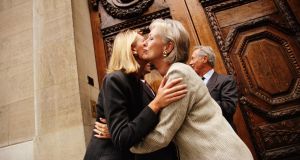 At my first job as a journalist in Paris, four colleagues and I shook the hands of two bosses every morning, but gave bises to each other. Photograph: Getty

“The bise has disappeared,” France’s newspaper of record, Le Monde, decreed last March, three days before the lockdown started. “Coronavirus has imposed its law. Fear has descended upon us.”

Now, as the crisis begins to ebb in France, critics of the bise, mostly women who endured too many wet, sloppy kisses, are hoping it will never return.

Yet the bise or cheek kissing is as French as the baguette and beret. Its permanent loss would be perceived by proponents as another step towards a drab, dehumanised and contactless society.

I received my first, memorable French bise at the age of 19, when a classmate and I embarked on a train trip across Europe. While she slept on the overnight to Nice, I conversed in rudimentary French with the young man in the overhead couchette. The following morning, he kissed me four times, alternating from cheek to cheek and explaining that four bises was special. It was innocent and touching and, though our acquaintance ended on the railway platform, hopelessly romantic.

During my year abroad in Paris, I became so Frenchified that I thoughtlessly planted bises on the cheeks of a friend’s father and brothers on returning to California. Their faces registered alarm and incomprehension.

The dilemma to bise or not to bise has niggled me ever since.

The website combiendebises.com published interactive charts showing the number of bises, from one to four, prevalent in France’s 101 departments

For the French bise was a highly codified ritual signifying many different things. Welcome, farewell, friendship, even treachery. (Remember Judas?) Like the distinction between familiar and formal pronouns, the practice was a social minefield. At my first job as a journalist in Paris, four colleagues and I shook the hands of two bosses every morning, but gave bises to each other.

The etiquette of bises was so complex that the website combiendebises.com published interactive charts showing the number of bises, ranging from one to four, prevalent in France’s 101 departments. In northern France they offered the right cheek first. In the south, the left.

American biologist Sheril Kirshenbaum, author of The Science of Kissing, suggests that humans began kissing each other for the same reasons animals do, to exchange information and signal trust and acceptance. Sniffing the other was a way of verifying their health.

For me the bise was often an olfactory experience. I enjoyed kissing certain friends because a heavenly scent of sandalwood, tuberose or orange blossom wafted towards me as I approached their cheeks. I learned to avoid those who exuded stale cigarettes, bad breath or body odour.

The French futuristic quarterly magazine Usbek & Rica recounted the history of the bise when it bade farewell to the custom. In 440 BC, Herodotus’s Histories recorded the kissing habits of Persians. Social equals greeted each other with a kiss on the mouth. If one was of slightly lower status, they kissed on the cheeks. And if one was clearly inferior, he knelt.

The handshake replaced the bise in 1660s London, as a result of the Great Plague

The Black Death fell upon Europe from 1347 until 1352, killing about 25 million people, up to half the continent’s population. “From the 14th century, the bise lost ground” for fear of contagion, according to L’Express magazine.

In the Middle Ages, a kiss was used to seal a contract, which is why we still use Xs to signify kisses in writing. Written bises survived the physical variety through the French lockdown. Trendy, hurried correspondents write simply Bz or Biz at the end of texts or emails. Colleagues sign off with amicable or collegial bises.

Historian Yannick Carré told France Culture radio that during the Renaissance, friends and relatives kissed one another on the cheek, while mouth kissing became the preserve of lovers.

Kirshenbaum’s book says the handshake replaced the bise in 1660s London, as a result of the Great Plague.

What will replace it? Lockdown-era elbow and foot knocking cannot last. Too silly, too awkward

The bise was popularised in working-class France after the first World War. It became common practice throughout French society, including among men, after the May 1968 revolution, anthropologist David Le Breton told France Télévisions.

Personally, I won’t regret the semi-obligatory professional and socialite bises. And I suspect the gesture will creep back among close friends and families.

But if the bise is dead, what will replace it? Lockdown-era elbow and foot knocking cannot last. Too silly, too awkward.

I favour one hand raised to the heart, Iranian style, or Namaste, the Indian gesture of hands joined in prayer position. The French sign-language gesture for “bonjour” – a light kiss to one’s own fingertips, which are then tilted towards the person being greeted – is lovely, and much less dangerous than pre-pandemic bises.