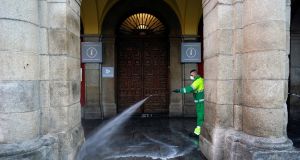 Pope Francis has begun the first of several Holy Week ceremonies that will be held behind closed doors this year because of the coronavirus pandemic.

Normally, tens of thousands of Romans and pilgrims, clutching olive branches, would have flocked to an outdoor Mass led by the pontiff.

Instead, Francis led the ceremony inside the shelter of St Peter’s Basilica, which seemed even more cavernous than usual because it was so empty.

Besides his aides, a few invited prelates, nuns and laypeople were present, sitting solo in the first pews and staggered, so they could stay a couple of metres apart to reduce risk of contagion.

Francis blessed braided palms held by the others, then held one himself.

The Vatican has said there are seven cases of Covid-19 among residents or employees of the tiny independent city state.

The coronavirus pandemic has infected more than one million people worldwide and over 63,000 deaths have been recorded.

Spain recorded 6,023 confirmed new infections on Sunday, taking the national tally to 130,759. That is down from an increase of 7,026 infections in the previous 24-hour period, confirming the downward trend of the past week.

Confirmed new deaths also dropped to 674 fatalities, taking the national tally to 12,418. That is the first time new deaths have fallen below 800 new fatalities in the past week.

As its outbreak loses steam, Spain’s government has started to cautiously consider when it can start to reactivate an economy that has been shut down and put hundreds of thousands out of work.

Prime Minister Pedro Sanchez said on Saturday: “We are starting to see the light at the end of the tunnel.”

In China, health authorities reported 30 new coronavirus cases on Sunday, including 25 people who had arrived from overseas. The other five cases were in southern China’s Guangdong province, which borders Hong Kong.

China has clamped down on international arrivals, banning most foreigners from entering and limiting foreign airlines to one flight per week. Having largely stopped the spread of the disease, the fear is that infected people coming from abroad could spark new outbreaks.

The National Health Commission said that three more people had died, bringing the country’s death toll to 3,329 as of the end of Saturday. The deaths were in Wuhan, where the pandemic began and by far the hardest-hit city in China. The number of confirmed cases stood at 81,669.

In the United States, President Donald Trump on Saturday told Americans to brace for a big rise in coronavirus fatalities in the coming days as the country faces what he called the toughest two weeks of the pandemic.

“There’s going to be a lot of death,” Mr Trump said at a briefing with reporters. “We are coming up to a time that is going to be very horrendous. We probably have never seen anything like these kind of numbers. Maybe during the war, during a world war One or Two or something.”

The president pushed back on criticism the federal government has not done enough to get ventilators that many critically ill coronavirus patients need to survive to the states, saying some governors are asking for more machines than they will need.

The rate of the coronavirus outbreak continues to slow in Spain, the country with the second most infections behind the United States.

France’s health director has said that 7,560 people have died of coronavirus-related issues in the country since the start of the epidemic, including at least 2,028 in nursing homes.

Among the critical patients 35 per cent are under 60 years old.

Italy’s virus-ravaged Lombardy region is now requiring residents to wear a protective mask when they go outside in a bid to further trim infections.

It mirrors similar orders in recent days from two other northern regions, hard-hit Veneto and Alto Adige, which require protective masks for residents particularly if shopping in stores and markets.

While all of Italy is under a nationwide lockdown, Lombardy has passed particularly tight restrictions on movement and business operations in an effort to curb infections in the epicentre of Europe’s outbreak.

Greece has put a migrant facility outside Athens on lockdown for 14 days after a 53-year-old Afghan man developed coronavirus symptoms.

In Sri Lanka, nearly 2,900 inmates have been released from overcrowded prisons as the Indian ocean island nation steps up its efforts to contain the spread of Covid-19.