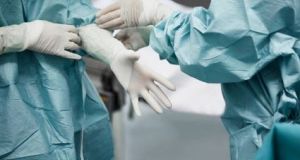 There have been concerns in the North about the lack of PPE equipment for health workers, as well as tensions between Sinn Féin and the other parties over how to handle the coronavirus crisis. Photograph: Getty Images

An order of personal protective equipment (PPE) from China which the North’s Minister for Finance, Conor Murphy, announced had been made jointly with the Irish Government has not been placed.

Mr Murphy told reporters on March 27th that a “very significant order” for PPE had been made. “We have the agreement with Dublin to jointly pursue this. We have the order placed.”

However, the Department of Health in Dublin said on Friday it “has not so far proved possible to place a joint order”.

Speaking at a press briefing, Dr Colm Henry, HSE chief clinical officer, said he was not aware of any joint PPE procurement between the Republic and the North.

Chief medical officer Dr Tony Holohan said if his counterpart in the North “identified a particular need...we’d be happy to work with them, as we do on many issues”.

Mr Murphy, a Sinn Féin MLA, clarified his position on Friday evening, explaining that it had been “agreed that orders would be placed through North-South collaboration” on March 27th, and that day his department “provided our detailed requirements for PPE to Dublin, and payment arrangements were in train”.

“However, over that weekend the market was upended when major economic powers entered the global race for PPE. Yesterday afternoon, despite best efforts of all involved, I received confirmation that the order would not in fact be fulfilled through this route,” he said.

Irish Government sources said there had been discussions about procuring a joint order in China, and that this had fallen through when “bigger players” entered the market.

In its statement the Department of Health said it was “ready to discuss any area where we can co-operate effectively, North and South, including on procurement of PPE and critical supplies”.

“In relation to procurement, while it has not so far proved possible to place a joint order in the context of what is an increasingly challenging international environment, discussions between procurement teams are ongoing and active, and it remains our intention to continue to co-operate in this area.”

There have been concerns in the North about the lack of PPE equipment for health workers, as well as tensions between Sinn Féin and the other parties over how to handle the coronavirus crisis.

On Thursday, the Deputy First Minister, Sinn Féin’s Michelle O’Neill, said the North’s Minister for Health, Robin Swann, had been “too slow to act”.

The UK health minister, Matt Hancock, has announced that the North is to receive 5 million items of PPE from British stocks.