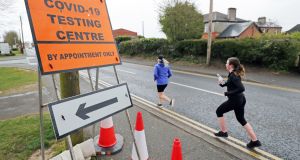 Joggers pass a sign for a testing centre in Newbridge in Co Kildare. Photograph: PA

Firms within the Irish pharmaceutical industry have sourced a raw material from Europe that can be used to produce scarce chemical reagents that has delayed coronavirus testing.

The shortage meant the State’s health authorities could only carry out 1,500 tests a day, far short of its daily target of 15,000 tests.

HSE chief executive Paul Reid said last week that Ireland was in a “chase around the world” with other countries to access supplies of reagents.

Widespread testing is seen as a key objective worldwide in the fight against the virus. Chemical materials used to make the reagents are also in short supply given the demand in many countries.

Pharmaceutical companies sought to help the Department of Health and HSE with testing by using their own networks of suppliers to source raw material to make the reagents within the State.

The firms were seeking a specific chemical compound called guanidine thicyanate in order to make a solution called a reagent called lysis buffer that is used to inactivate the virus and break open cells in order to identify their genetic make-up to confirm whether a patient has the virus.

The compound was sourced by Clonmel company Camida. If it arrives in Ireland over the coming days, reagent can be produced for testing within weeks.

“We hope to get it in next week. It is waiting to be shipped,” Matt Moran, director of the pharmaceutical industry lobby group BioPharmaChem Ireland told The Irish Times.

“If we can get it in next week, we should be able to start making it. It will be weeks rather than months. We are aiming to get it out in the next couple of weeks.”

The group believes that it can source chemical material to make enough reagent in the State to be able to carry out around 500,000 tests.

The lobby group did not want to disclose the name of the European country where it has sourced the raw material given the level of demand for it.

“Finding it has been a bit of an achievement. There were a number of countries looking for it and we beat them to it,” said Mr Moran.

The pharmaceutical companies which hoped to make the reagents for use as part of the HSE testing are multinational firms operating in Ireland.

“These plants are all in production and fully operational. They don’t want to be named. They want to do this as a kind of national interest effort,” he said.