‘We must not be afraid to hold this regime to account,’ writes Cardinal Charles Bo 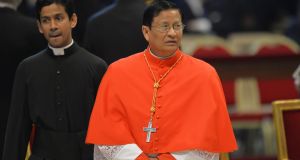 Cardinal Charles Bo: “When the virus first emerged, the authorities in China suppressed the news,” he said. Photograph: Andreas Solaro/AFP via Getty Images

The leader of the Catholic Church in Asia, Myanmar’s Cardinal Charles Bo, has launched a scathing attack on the Chinese leadership, holding it responsible for the worldwide coronavirus pandemic.

“The Chinese regime led by the all-powerful Xi Jinping and the CCP [Chinese Communist Party] – not its people – owes us all an apology and compensation for the destruction it has caused,” he said.

The regime, he said, “is responsible, through its criminal negligence and repression, for the pandemic sweeping through our streets today”.

He said that “as a minimum, it should write off the debts of other countries to cover the cost of Covid-19. For the sake of our common humanity, we must not be afraid to hold this regime to account.”

The cardinal, president of the Federation of Asian Bishops Conferences, said “no corner of the world is untouched by this pandemic, no life unaffected”. In his own country, Myanmar, “we are extremely vulnerable. Bordering China, where Covid-19 first began, we are a poor nation without the health and social care resources that more developed nations have,” he said.

He was writing in an article titled “The Chinese regime and its moral culpability.”

“Let me be clear – it is the CCP that has been responsible, not the people of China, and no one should respond to this crisis with racial hatred toward the Chinese. Indeed, the Chinese people were the first victims of this virus and have long been the primary victims of their repressive regime,” he said.

“When the virus first emerged, the authorities in China suppressed the news,” he said. The doctor who discovered the virus, Dr Li Wenliang of Wuhan Central Hospital, “was told he would be investigated for ‘spreading rumours’ and was forced by police to sign a confession. He later died after contracting coronavirus,” the cardinal recalled.

“Young citizen journalists who tried to report on the virus then disappeared”, and “once the truth became known, the CCP rejected initial offers of help”, he said.

Through its “inhumane and irresponsible handling of the coronavirus, the CCP has proven what many previously thought: that it is a threat to the world. China as a country is a great and ancient civilisation that has contributed so much to the world throughout history.”

He also criticised the Chinese regime’s human rights record, saying that “in recent years, we have seen an intense crackdown on freedom of expression in China. Lawyers, bloggers, dissidents and civil society activists have been rounded up and have disappeared.

“In particular, the regime has launched a campaign against religion, resulting in the destruction of thousands of churches and crosses and the incarceration of at least one million Uyghur Muslims in concentration camps.”

Cardinal Bo was appointed Myanmar’s first cardinal by Pope Francis in 2015, and elected president of the Federation of Asian Bishops Conferences in 2018.

In September 2018 the Catholic Church in China pledged to remain loyal to the Chinese Communist Party.

Meanwhile, a new poll in the US has shown that Americans’ opinions of Pope Francis have recovered after hitting an all-time low in 2018 following revelations of clerical child abuse in the Pennsylvania grand jury report and the resignation of former cardinal Theodore McCarrick also in connection with abuse.

The Washington-based Pew Research Center survey found that six out of 10 US adults now have a “very” or “mostly” favourable view of Pope Francis, up from roughly half who said this in September of 2018. More than three-quarters of Catholics (77 per cent) now view Pope Francis favourably.