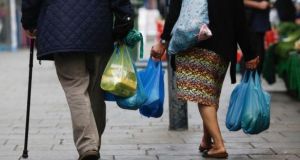 Authorities in the Republic have said they will not be following the example of the North’s Department of Environment in waiving the plastic bag tax during the Covid-19 outbreak. File Photograph: Simon Dawson/Bloomberg

Authorities in the Republic have said they will not be following the example of the North’s Department of Environment in waiving the plastic bag tax during the coronavirus outbreak.

Earlier this week the North’s Environment and Rural Affairs Minister Edwin Poots announced a temporary waiver of the plastic bag tax, to help stem the spread of coronavirus, also known as Covid-19.

Mr Poots said the move was important as it would mean that delivery drivers would not have to go into homes and unpack the crates in which groceries are delivered. He said by providing bags free of charge, the necessity for drivers to enter people’s homes and unpack crates will stop. “Instead, bags of groceries will be left outside and so the need to have direct contact with customers will become redundant” he said.

Mr Poots added the decision to amend the North’s carrier bag legislation had been taken in line with public health guidance, aimed at the reduction of face-to-face contact between delivery drivers and members of the public who have ordered groceries online.

The “plastic bag tax” as the levy is known in the South was introduced in 2002 and is currently 22 cent per bag. Since its inception it has raised tens of millions of euro for the State’s Environment Fund which finances waste management, litter and other schemes aimed at protecting the environment.

However authorities in the South have dismissed the move. The Department of Communications, Climate Action and Environment said: “This matter is not currently being considered in Ireland’s response to Covid19. The Department will continue to follow any advice issued from the National Public Health Emergency Team.”