WHO warns of ‘catastrophic moral failure’ in Covid vaccine distribution 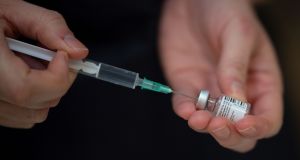 The world is on the brink of a “catastrophic moral failure” in the distribution of Covid-19 vaccines, the World Health Organisation (WHO) has warned.

Global health leaders said that in one low-income country just 25 people have been vaccinated.

The WHO’s director general, Dr Tedros Adhanom Ghebreyesus, has called for equitable distribution of the vaccine.

“The price of this failure will be paid with lives and livelihoods in the world’s poorest countries,” he told the WHO’s executive board meeting.

“There will be enough vaccine for everyone. But, right now, we must work together as one global family to prioritise those most at risk of severe diseases and death in all countries.

“More than 39 million doses of vaccine have now been administered in at least 49 higher-income countries. Just 25 doses have been given in one lowest-income country. Not 25 million; not 25,000; just 25.”

Dr Tedros added that a “me first” approach would prolong the pandemic as well as human and economic suffering.

A global vaccine-sharing fund, Covax, which subsidises low-income countries, is preparing to deliver its first doses in February.

“Even as they speak the language of equitable access, some countries and companies continue to prioritise bilateral deals, going around Covax, driving up prices and attempting to jump to the front of the queue,” Dr Tedros said.

“This is wrong. Forty-four bilateral deals were signed last year and at least 12 have already been signed this year.

“The situation is compounded by the fact that most manufacturers have prioritised regulatory approval in rich countries where the profits are highest, rather than submitting full dossiers to WHO.”

Last week the British government announced the UK has helped to raise $1 billion (€83m) for the coronavirus Covax advance market commitment through match-funding other donors.

Officials said that this, combined with the £548 million (€616m) of UK aid, will help distribute one billion doses of coronavirus vaccines to 92 developing countries this year. Four million people have been vaccinated against Covid-19 in the UK.

A total of 94,000 people in Ireland had received a dose of the Covid-19 vaccine as of Sunday night, some 1.9 per cent of the State’s population, Minister for Health Stephen Donnelly said.

Mr Donnelly on Tuesday said 71,000 healthcare workers and 23,000 residents and staff in long-term care facilities had received the vaccine. The goal is to have 140,000 people vaccinated by next Sunday, he added. – PA