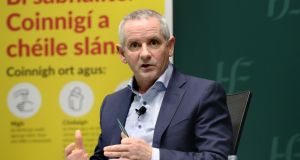 HSE chief, Paul Reid, says there should be a back-up plan for when there are extra vials of the vaccine or if people scheduled to be vaccinated do not show up. File photograph: Sam Boal/Photocall Ireland

The chief executive of the Health Service Executive (HSE) has said he is “disappointed” by news that people not working in frontline healthcare roles have been given Covid-19 vaccines.

Paul Reid said reports about family members of staff at the Coombe and Rotunda hospitals in Dublin receiving vaccines “don’t do any of us any good, or the programme any good”.

“Some of what we heard shouldn’t have happened,” he told RTÉ’s Today with Claire Byrne programme. “I’m disappointed that they’ve happened. They are a small number of cases but I do appreciate they caused significant distress.”

The HSE is prioritising frontline healthcare workers and people aged 65 and older in nursing homes and other care settings due to the limited supply of vaccines available.

Sinn Féin’s health spokesman David Cullinane said on Tuesday that the party was hearing evidence from other hospitals about non-frontline staff receiving vaccinations ahead of other workers.

“We have got a lot of anecdotal evidence coming from staff in different hospitals in relation to non-patient facing staff getting vaccines ahead of frontline staff,” he said, adding that he had raised the issue with Minister for Health Stephen Donnelly and Prof Brian MacCraith of the vaccine taskforce.

Mr Cullinane said the optics of what happened in the Coombe hospital were not good.

Mr Reid said people were “working at pace” and in some cases doses of the vaccine were left after those scheduled to receive the jab at a facility were done and that it would “be a shame to waste” these.

“However, what we really need to make sure now is that there are very clear guidelines. Equally, that there be a stand-by list of the right workforce to get that,” he said. “Everybody needs to learn from what happened.”

He said the HSE had set out “clearer principles” on January 12th, four days after the vaccines were given out at the Coombe, in a document issued on sequencing vaccine provision and how to prioritise within the workforce.

Hospitals or facilities where vaccinations are being carried out should “have a backup in case some of your prioritised workforce doesn’t show up on the day or you have extra vials”.

Mr Reid said the vaccination effort has gone “primarily to plan” so far and that he hoped 140,000 people would have received a first dose by the end of the week.

“The pace at which the programme is rolling out is very significant. We are meeting every level of supply that we get in. The shift has happened this week in terms of prioritising healthcare workers and residents in long-term care facilities, which will be completed by the end of this week. That’s a change of plan,” he said.

“The first level of distributions to hospitals and healthcare workers has stalled this week while we complete the prioritisation of the long-term care facilities.”

Under the vaccination plan, after over-65s in care homes and frontline health workers, people aged 70 and older and other healthcare workers are next in line to receive the vaccine.

The following categories are: people aged 65-69 years; an ill-defined group referred to as “key workers”; and people aged 18-64 with certain medical conditions.

Next up will be: those living or working in crowded conditions; people working in education; those aged 55-64; workers in other occupations important to the functioning of society; people aged between 18 and 54; and, finally, pregnant women and those under 18.