With pathogens lurking on every surface, sensor- and voice-activated tech is on the rise 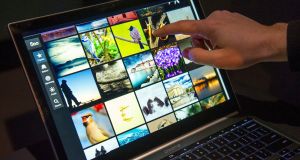 Microbiologists at the University of Arizona have reported that touchscreen smart devices may have up to 10 times more bacteria than a toilet seat. Photograph: David Paul Morris/Bloomberg

The Covid-19 pandemic has been a forceful reminder of the pathogens present in our everyday environments. Together with Covid-19, most of us know that MERS and SARS are also coronaviruses.

In the wider family of viruses, ebola, hentavirus and dengue are among the most threatening. Food safety campaigns warn us of bacterial infection risks from salmonella, e.coli and campylobacter. The World Health Organisation has reported acinetobacter baumannii as one of the most dangerous antibiotic-resistant bacteria worldwide, annually killing thousands. Then there are parasites such as cryptosporidium, plasmodium and toxoplasma. Plasmodium, transmitted especially by mosquitoes, alone causes about 400,000 deaths worldwide per year.

The pandemic has made us much more conscious of the dangers of airborne disease. From an initial wariness of face masks, influenced in March 2020 by both the WHO and the Government imploring us not to wear such masks, most of us now routinely wear them in public. Thanks to a relatively mild winter to date, continuous air flow through our homes, schools and buildings by leaving windows and doors ajar has been possible albeit chilly. As well as air-borne pathogens, we are also more conscious of their presence on surfaces.

CSIRO, Australia’s national science agency, has verified that Covid-19 can survive up to 28 days in laboratory conditions on hard surfaces including glass, steel and plastic-covered banknotes.

We routinely share hard surfaces in public such as door handles, transport safety handrails, food service trays, food storage shelving, plastic seating and tables. Touchpad and touchscreen kiosks are becoming pervasive: bank ATMs, ticketing and seat reservation for public transport, and interactive public street guides immediately come to mind. Microbiologists at the University of Arizona, and other researchers, have reported that touchscreen smart devices may have up to 10 times more bacteria than a toilet seat. Something to think about the next time you order your food using a public touchscreen menu.

Commercial interest in touchless technology is thus naturally increasing. The first popular touchless technology was invented 100 years ago. Lillian Moller was one of the first female engineers in the USA to be awarded a PhD, and she went on to invent the pedal-operated kitchen waste bin in the 1920s. Today, touchless technology includes the hand dryers common in many public toilet facilities, and sensor-operated doors, common in supermarkets and other buildings, as well as fob-based office doors.

It is hardly surprising that various established firms and start-ups are creating a new generation of touchless technologies. The intense energy of ultraviolet light can kill pathogens on exposed surfaces, but is generally only safe if humans are absent. In 2016, Boeing claimed a patent for disinfecting idle aircraft toilet cubicles with UV light. Some aerospace supply firms now likewise offer UV light systems to disinfect cockpits and passenger cabins when unoccupied. There are robots on offer which are fitted with UV light to disinfect in hospitals or other settings.

In many public washrooms, you can wave at a toilet handle, soap dispenser or basin tap to activate it. General recognition of gestures in three dimensions first was commercialised in Microsoft’s Kinect addition to the Xbox 360 gaming console in 2010. Intended to replace a hand-held console, the Kinect system recognised body movement in 3D, allowing gamers to control a game through physical gestures. Although Microsoft subsequently dropped Kinect from the Xbox due to insufficient support from game developers and publishers, 3D gesture recognition remains an active area of commercial interest for industrial applications.

Some 3D gesture-recognition systems are now evolving to give haptic feedback. Wristbands, with multiple pressure points against the skin, can confirm a gesture has been correctly understood. A Bristol startup, Ultraleap, uses a small array of independently controlled speakers to modulate ultrasound waves and so create the sensation of touch literally in thin air. In principle, you can thus activate a ghostly switch or button without any physical touch involved.

Voice assistants have become common at home via Amazon’s Alexa, Apple’s Siri and Google’s Home Assistant. The quality is slowly improving as they learn regional accents and slang. Voice assistants are becoming more ubiquitous as third-party manufacturers integrate voice activation into their products and offerings.

Nevertheless, some consumers remain wary about big tech harvesting private data from households. Furthermore, internet connections and even back-end servers can be fragile. Last November, some owners were physically locked out of their own homes by their voice-activated security devices, when multiple Amazon servers catastrophically went offline for several hours.

Perhaps the most significant resistance to any move to touchless technology is the sheer capital cost of discarding and replacing otherwise perfectly good devices, equipment and units that are already installed and in daily use. As the public inevitably – and correctly – presses for sanitised shared spaces, new touchless technologies will become attractive if they can be cheaply retrofitted for existing units and equipment.