More than 30.7 million have been infected globally by Covid-19 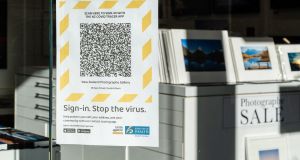 A sign displays a QR code for the NZ Covid Tracer app outside a store in Queenstown, New Zealand. Photograph: Mark Coote/Bloomberg

More than 30.7 million people have been reported to be infected by the novel coronavirus globally and more than 950,000 people have died, according to a Reuters tally.

All remaining virus restrictions will be lifted across much of New Zealand from late on Monday with the exception of the largest city, Auckland, Prime Minister Jacinda Ardern said.

Auckland will continue to have some restrictions for at least another 16 days.

Ms Ardern made the announcement on Monday after meeting with prominent politicians.

The nation of five million people reimposed some restrictions last month after a fresh outbreak in Auckland, which now appears under control.

Under the plan, maximum gathering sizes in Auckland will be increased from 10 to 100 on Wednesday and then caps removed two weeks after that.

“Whilst we have reasonable confidence we are on the right track, there is still a need in Auckland for that cautious approach,” Ms Ardern told reporters.

Health authorities reported no new cases on Monday. The number of active Covid-19 cases is 62, with 33 of those from community spread and 29 among quarantined returning travellers.

In other developments in the Asia-Pacific region, South Korea’s daily virus tally has stayed below 100 for a second consecutive day, maintaining a slowing trend in fresh infections.

Australia’s coronavirus hotspot of Victoria reported on Monday its lowest daily rise in infections in three months, although state premier Daniel Andrews said there were no plans yet to ease restrictions sooner than expected.

Victoria, Australia’s second-most populous state and home to a quarter of its 25 million people, reported 11 new coronavirus cases in the past 24 hours, the smallest one-day jump since June 16th. It also reported two deaths due to the virus.

“This is not just a good day. This is a great day,” Andrews told reporters in the Victorian capital, Melbourne.

But the premier said his government would not accelerate a timetable for easing restrictions, which were imposed after daily case numbers topped 700 in early August.

Melbourne has been under one of the toughest lockdowns, including nightly curfews, but the state government has said it will let construction sites, manufacturing plants, warehouses and childcare facilities in the capital reopen on September 28 if the average number of cases over two weeks is below 50.

The average in Melbourne is now below 35.

The restrictions in Victoria, the epicentre of Australia’s Covid-19 outbreak, have however prevented a second wave of infections in the country.

Australia has reported nearly 27,000 cases, 75 per cent of which have been in Victoria, and 851 deaths due to the virus. Nearly 90 per cent of all COVID-19 deaths have been recorded in Victoria.

The Korea Disease Control and Prevention Agency said the 70 new cases added in the past 24 hours took the country’s total to 23,045 with 385 deaths.

The drop to double digits on Sunday was the first in about 40 days. South Korea conducts fewer tests on weekends. But its recent virus resurgence has been on a downward trajectory amid strong social distancing rules since its daily tally surpassed 400 in late August.

The United States set a one-day record with more than 1 million coronavirus diagnostic tests being performed, but the country needs 6 million to 10 million a day to bring outbreaks under control, according to various experts.

The country performed 1,061,411 tests on Saturday, according to data from The Covid Tracking Project, a volunteer-run effort to track the outbreak.

The record comes after testing has fallen for several weeks.

Since the start of the pandemic, testing shortages have hampered efforts to curb the spread of the virus.

At one point during the summer, Houston residents lined up in cars and waited hours for tests, even sleeping in their vehicles overnight. Miami saw similar lines.

Once tested, people may have to wait up to two weeks to learn if they have the virus, which has killed nearly 200,000 Americans and infected more than 6.7 million. Such delays defeat the purpose of trying to prevent further infections.

In March, US president Donald Trump said “anyone who wants a test, gets a test.” That goal has yet to be achieved.

In mid-September, 27 of 50 states had positive test rates above 5 per cent, according to a Reuters analysis, including South Dakota at 17 per cent.