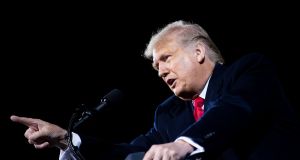 US president Donald Trump said he supports a deal that will allow TikTok to continue to operate in the United States, after threatening to ban the Chinese-owned app in August. Photograph: Brendan Smialowski / AFP via Getty Images

US president Donald Trump said he supports a deal that will allow TikTok to continue to operate in the United States, after threatening to ban the Chinese-owned app in August.

He told reporters at the White House that he backs the deal with TikTok owner ByteDance, Oracle and Walmart to create a new company that will assume TikTok’s US operations called TikTok Global.

The US Treasury said in a statement “Oracle will be responsible for key technology and security responsibilities to protect all US user data. Approval of the transaction is subject to a closing with Oracle and Walmart and necessary documentation and conditions to be approved by” the Committee on Foreign Investment in the United States.

The US commerce department said on Saturday it will delay by one week an order that had been set to take effect late on Sunday that would stop Alphabet Inc’s Google and Apple Inc from offering TikTok in their US app stores.

US shareholders are expected to control 53 per cent of TikTok Global, a person briefed on the matter said, while Chinese investors will hold 36 per cent.

Oracle said it will take a 12.5 per cent stake in TikTok Global.

TikTok said under the deal, Oracle and Walmart will take part in a TikTok Global pre-IPO financing round in which they can take up to a 20 per cent cumulative stake in the company.

The remaining 80 per cent will be held by ByteDance but is not clear if the ByteDance shares in TikTok Global will be distributed to ByteDance’s investors when TikTok Global is incorporated, according to the source.

US investors own about 40 per cent of ByteDance.

TikTok said it was “pleased that the proposal by TikTok, Oracle, and Walmart will resolve the security concerns of the US administration and settle questions around TikTok’s future in the US”.

Mr Trump offered strong support for the deal he said would create 25,000 US. jobs. “I have given the deal my blessing,” Mr Trump said. “I approve the deal in concept.”

About 100 million Americans use TikTok and US officials have expressed concern about user data and the potential for China to access that data.

“The security will be 100 per cent,” Mr Trump told reporters.

Reuters reported on Thursday that TikTok Global will have a majority of American directors, a US chief executive and a security expert on the board.

ByteDance has agreed to significant security safeguards on the data of US users with Oracle housing all data and getting the right to inspect the TikTok source code.

Mr Trump expressed annoyance this week that government lawyers told him it was not permissible to demand a “chunk” of any TikTok sales price for the Treasury.

He said there would be a $5 billion US education fund as part of the deal. “That’s their contribution I’ve been asking for,” Mr Trump said.

He said the new company will most likely be incorporated in Texas and have at least 25,000 employees.

Reuters reported on Thursday that ByteDance is planning a US initial public offering of TikTok Global. The filing of an IPO for TikTok Global would be on a US stock exchange and could come in about a year, the sources said, requesting anonymity because the matter is confidential.

Part of the proceeds from the IPO are expected to be used to finance the $5 billion education fund, the source said. ByteDance and Oracle did not immediately respond to requests for comment.

China still must approve the deal. “We’ll see whether or not it all happens,” Mr Trump said.

Texas governor Greg Abbott said earlier on Twitter that he had talked to Mr Trump about the deal. “I let him know that if he approves the deal Texas would be the perfect place for the HQ,” Mr Abbott said.

Meanwhile, a California judge has temporarily blocked a US Department of Commerce ban on Chinese social media app WeChat just hours before it was due to be implemented, dealing a blow to Mr Trump’s efforts to curb use of the app because of security concerns.

Judge Laurel Beeler of the Northern District of California granted a nationwide injunction on Sunday suspending the order for Apple and Google to remove WeChat, which is owned by Chinese technology group Tencent, from their app stores. The order had been due to come into force later in the day.

The plaintiffs, primarily a group called the US WeChat Users Alliance, said in their lawsuit that the ban, which would have made the app essentially unusable in the US, violated First Amendment-protected freedoms of speech, especially for Chinese Americans. –Reuters