Louth publican ‘apprehensive but excited’ to reopen after six months 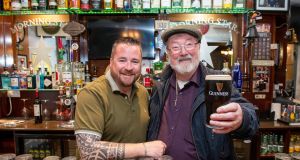 Stuart Carolan and his father Patrick have spent €40,000 to ensure their pub The Morning Star complies with the Covid-19 guidelines before they open the doors this evening for the first time in six months.

“I am feeling a little bit apprehensive but excited at the same time. I am really looking forward to seeing our regulars, our customers and staff again,” says Stuart.

A thatched pub with hanging baskets in the village of Tullyallen, it is believed to be one of the oldest in Co Louth.

As a so-called “wet pub” that does not serve food, it has not been able to reopen until now under Government rules.

Stuart says they could have opened earlier by taking advantage of the takeaway beside them but decided it was not the right thing to do.

“I think that morally we did not think it was right, we thought it was like bringing food in the back door,” he says.

“The other thing is that unless you are used to [serving food], I don’t think you could guarantee the health and safety of your staff for a start and then for your customers second of all.”

However, he says that if the Government had told them six months ago they would be unable to reopen until now, “we probably would have done food”.

“We replaced all the furniture in order to allow for socially distancing,” he says, adding that the seating is now made from leather because the previous material was cloth “and you would never be able to sanitise it properly”.

Pods have been built in the outdoor area to help with social distancing and there are transparent Perspex-style screens at the bar to protect staff.

Customers will be met at the door by staff who will take their temperature, sign them in and take contact details, then allocate them a table to sit at. There will be no bar service.

Stuart says staff will police customers to make sure they are complying.

He also expects and will welcome Garda spot checks to ensure pubs are complying. “To be honest I am welcoming it because the way I look at it is that it is a free risk assessment,” he says. “If the customers see the guards coming in, it enforces that they are not our rules and that these rules and guidelines are being enforced upon us.”

He has no sympathy for the pubs that face penalties for non-compliance.

“They have only got themselves to blame if the law comes down on top of them,” he says.

“As an industry we have to comply and do as we are told, otherwise we are going to be under these guidelines forever if the cases keep rising and people are not doing as they are told.”

That said, he says the pub industry feels “very let down” by the Government.