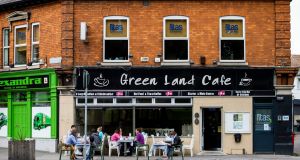 Food businesses and restaurants in Dublin have described the support of customers over the first weekend of enforced closures as “unbelievable” and “amazing”.

The Government decided to permit Dublin restaurants and pubs that serve food to open only for outdoor dining or for takeaway services, due to an increase in the incidence of Covid-19 in the city.

On Friday evening Niall Sabongi, the owner of Sustainable Seafood Ireland, which supplies seafood to many restaurants across the capital, took to social media to express frustration with the manner in which the closures were imposed with little or no notice.

He said he had been left with about €30,000 worth of perishable stock that had been due to go to restaurants which had been forced to close virtually overnight.

Word got out about the surplus stock, and large queues formed on Saturday at SSI stalls in farmers’ markets in Airfield, St Anne’s Park and Herbert Part as well as the company’s headquarters in Clonshaugh.

Mr Sabongi described the support as “unbelievable”. He said some customers had waited in line for almost four hours. “Honestly, the team and I are so grateful,” he said.

Barry Sun, the owner and head chef of Volpe Nera in Blackrock, described the support from the local community as “amazing”.

“We already had a small outdoor dining space for six people, but our neighbours at the Wishing Well pub next door have kindly given us some of their outdoor space so that we can now have up to 15 diners outdoors,” he told The Irish Times.

All the outdoor tables were fully booked on Saturday while reservations continued to flow in on Sunday. He said that for the next three weeks, the restaurant plans to continue with its outdoor dining and takeaway service.

“We are also working on bringing back our Volpe Nera at Home, with family-style sharing meals. It’s not the same as having our full restaurant open, but for now we are happy to be able to continue working and looking after our customers and our staff in whatever way we can,” he said.

Jamie O’Toole, co-owner of the Mister S and Featherblade restaurants, said being able to offer takeaway has provided a vital revenue stream.

“Many restaurants simply can’t provide enough work for all their staff to make a decent living, no matter how busy the takeaway is. We’ll just knuckle down and make it work somehow. I think most restaurants just need to find a way to keep their staff supported while not going out of business.”

Outside of Dublin the impact of the restrictions was also being felt.. “We have had a number of cancellations from Dublin-based guests and while this is difficult we appreciate people taking personal responsibility to adhere to Government guidelines, said Carol Barret, of Dunmore House in Clonakilty.

“Luckily, we have found that the rooms that became available are being booked by other guests from around the country. We are finding that the staycation business is still holding up well in west Cork which seems to be one of the ‘go to’ destinations this year and we’re very grateful for it.”