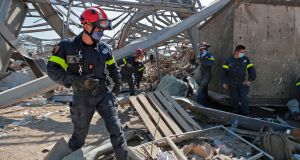 French rescue workers search through the rubble in the devastated Beirut port on Friday. Photograph: Joseph Eid/AFP via Getty Images

Lebanon’s president has rejected calls for an international inquiry into the blast that ripped through Beirut and killed more than 150 people, as anger grows over government incompetence.

Michel Aoun said in a speech on Friday that demands for an international probe were aimed at “distorting the truth” and slowing the process.

The cabinet has already announced a probe into Tuesday’s explosion. But some Lebanese politicians, civil rights organisations, international human rights groups and France’s President Emmanuel Macron, who visited Beirut on Thursday, have urged Lebanon to hold a transparent, international investigation. Mr Aoun denied that Mr Macron had raised the issue.

Lebanese officials believe the blast was caused by 2,750 tonnes of ammonium nitrate, which can be used for fertiliser as well as for making bombs. It was stored for at least six years at a warehouse in Beirut port.

But on Friday, Mr Aoun said an investigation – led by the judiciary but partly undertaken by the military because of Beirut’s two-week state of emergency – had still not identified the cause. He added that the authorities were looking into the possibility of “external interference”, as well as whether it was an accident or the fault of negligence.

“The cause of the explosion has not yet been determined, as there is a possibility of external interference via a missile, bomb or any other action,” said Mr Aoun, according to state media, which published the speech.

He added that he had asked Mr Macron “to provide us with aerial photos of the explosion”. “If they don’t have them then we will ask other countries to determine whether the attack was external or [caused by] fire,” said Mr Aoun. He did not clarify how aerial photos would be used to determine either possible cause.

Military police undertaking the investigation have so far interviewed 21 people, including a former minister, according to a government source familiar with the process. The person said another former minister would face questioning on Saturday. Currently 19 people are in detention related to the case, the person said.

In a televised speech on Friday, Hassan Nasrallah, the leader of Hizbullah, a Shia Islamist political party and US-designated terror group, denied that any Hizbullah military equipment was at the port – “neither a weapons store nor missiles . . . nor nitrates”. He said the investigation would prove that.

While most evidence has so far pointed towards catastrophic negligence by authorities, from customs to the judiciary, US president Donald Trump suggested on Tuesday that the explosion was a deliberate attack. He said he had spoken to some of his top generals who believed a bomb may have been responsible.

A day later, Mark Esper, his defence secretary, appeared to contradict the president, saying most people believed it was an accident.

Officials in Israel, which fought a month-long war with Hizbullah in 2006 and whose forces sporadically clash with the group across the border, have denied any involvement by the Jewish state.

Mr Aoun’s comments came as bodies were still being pulled from the wreckage. A group of French rescue workers were seen in the nearby devastated Gemmayze neighbourhood, where crowds of volunteers have been wielding brooms and spades. Aid from countries including Kuwait and Turkey has begun to arrive.

As public anger towards the government intensifies, activists have called for protests over the weekend. People are enraged not just by official failures that allowed the catastrophe to happen but by the lack of state support in the aftermath.

On Thursday night, security forces tear-gassed protesters trying to reach the parliament building. Protesters chanted “revolution”, the slogan that came to represent the mass demonstrations over official corruption and inequality that erupted in October last year.

“What are they protecting?” Aya Majzoub, a Lebanon researcher for Human Rights Watch, wrote on Twitter after the tear gas was fired. “A hollow, destroyed building that used to be inhabited by politicians that have lost all credibility?” – Copyright The Financial Times Limited 2020

No-deal Brexit’s economic cost for UK ‘could be three times worse than that of Covid’ 20:27
Germany declares Dublin a Covid-19 risk area because of high number of cases in capital 20:25
Cult leader who claims to be reincarnation of Jesus is arrested in Russia 19:38
Breonna Taylor killing: Police officer is indicted by grand jury 18:54
EU unveils plan to overhaul migration 18:54