Donald Trump’s problem is that he is not authoritarian enough

US Politics: It is the president’s lack of grip, rather than an iron fist, that has sunk his chances 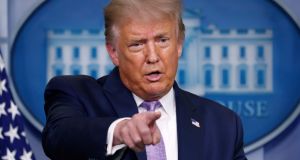 President Donald Trump: “He is a strongman but not a strong man.” Photograph: Andrew Harnik/AP

Three-word slogans, starting with a verb, are the currency of the populist. “Take back control” and “Build that wall” served the Anglo-American wing of that movement handsomely in 2016. Leaders become verbose in office – courtiers, those patient listeners, encourage bad habits – but one of Donald Trump’s best-performing tweets of late honours the format. “OPEN THE SCHOOLS!!!” howled the US president, to 400,000 retweets in 24 hours.

The sentiment, you will notice, is the opposite of authoritarian. But then so was his first response to Covid-19: the slowness to close things, to encourage or even to respect mask-wearing. And so is the White House line on fiscal relief. Larry Kudlow, his economic adviser, worries about “disincentives” to work. Whatever spirit infuses that comment, it is not heavy-handed paternalism.

Even before he was elected, liberals interpreted Trump as an authoritarian above all. In her new book, Twilight of Democracy, Anne Applebaum is not alone in conflating him with the likes of Hungarian prime minister Viktor Orban.

This analytic sleight of hand would not matter, except that it leads to false hope. It implies that electoral defeat for Trump in November would be a rejection of autocracy. After a bleak half-decade, the free society will have a public affirmation on which it can build. “Snatch our liberties,” leaders would hear from voters, “at your own peril.”

So soothing is this thought, it is a shame that it is wrong. Trump is not losing this election because of his authoritarianism. If anything, it is through his laxity that he has forfeited public trust. His hands-off approach to the virus (America has lost 150,000 people to it) is what turned the polls conclusively against him. His more conventionally hardline acts had failed to do that.

After his harshness on migrants at the Mexican border, he held up in the polls. After his various travel bans, his popularity recovered. His screeds against journalists, judges, civil servants and those who investigated or bore witness against him: after all this, he was roughly evens to be re-elected.

True enough, his aggressive response to this summer’s protests was unpopular. But he was already sinking in the polls by then. Do the thought experiment: had Trump suppressed the virus promptly and effectively, but still cleared Lafayette Square for a photo-op, would he be 10 points behind the Democrat Joe Biden?

It is not the president’s incineration of liberal norms that voters are punishing. It is his lack of grip, which is all the less pardonable in a leader who was billed as draconian. Trump’s problem is that he gives Americans the form and style of autocracy but not the sense of protection that constitutes its substance. He is a strongman but not a strong man. It follows that the real thing – a truly commanding autocrat – could still win their support. Even a Democratic landslide in November would not prove otherwise. Any liberal glee on that night should be tempered.

Populists have always faced two ways on the question of human freedom. They relish a more invasive state in some realms (trade, immigration, crime) but chafe at even tentative measures in public health, tax and the environment. The ogre known as “Washington” is somehow both a cloying nanny and a sort of absentee landlord, aloof as the heartland succumbs to deindustrialisation and opioid abuse. Britain’s Conservatives, those other bunglers of the Covid-19 pandemic, embody this conflict as much as the US Republicans.

There is no disgrace in intellectual contradiction. But it is crucial to see that of populism’s two impulses, the authoritarian and the cussedly independent, it is the second that is doing for Trump. Voters want a later rather than earlier opening of schools by a margin of two to one. They worried about a premature thaw of economic restrictions in May. Fiscal transfers in a ruined economy are wildly popular with them. On the other hand, they saw more than three years of demagoguery without turning on him.

Knowing this, Biden is not running as the liberal corrective to a Caesar. He is just running as a more proficient doer of things. His platform will tranquillise you with its plan to “scale up employment insurance by reforming short-time compensation programs” and such. His attacks on Trump major on his insouciance about the virus circa January 2020, not his on-off relationship with the rule of law.

It should go without saying that a President Biden would also be less of an autocrat. Just let us not pretend that voters are electing him on that basis. – Copyright The Financial Times Limited 2020