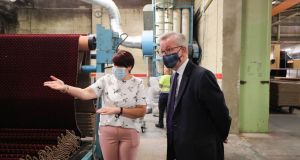 An announcement of £650 million in funding for Northern Ireland was proclaimed by the British government as a “major . . . investment” and statement of London’s “commitment” to the people and businesses there. But dig into the numbers and the spin is apparent.

Of the headline figure, £300 million is peace funding that had already been pledged back in January 2019, to continue joint projects with the European Union.

The rest is spending on new import procedures for goods entering Northern Ireland from Britain and the rest of the non-EU world that is only necessary due to Brexit. It could therefore be presented as a cost to the taxpayer rather than a bonus.

Beneath the rather disingenuous packaging, there is some substance that industry figures in the North have welcomed – though with caveats.

In all, £200 million is dedicated to setting up and running for two years a trader support service, which is essentially designed to take care of import procedures and their associated costs that businesses would otherwise have to shoulder themselves.

What happens after the two years and the £200 million ends is currently uncertain, but British sources insisted it was intended as an ongoing commitment.

The remainder of the money is for the IT systems that would support the service “to ensure the new processes can be fully digital and streamlined”, according to the British government.

The trader support service does not cover everything. It does not include import VAT obligations, and would not cover the most onerous kind of check, the sanitary and phytosanitary controls that are required to prevent any threats to plant, animal or human health from goods of plant or animal origin.

It also does not cover export health certificates, required to export animals or animal products from Britain into the North or the EU from January. It’s for businesses only, so it does not include sales of goods from Britain to private individuals in Northern Ireland, such as through online shopping.

There are also numerous things that are yet to be settled. Whether or not businesses will be faced with the onerous tariff schedule of the World Trade Organisation on trade with Britain depends on if a deal can be reached on time.

Britain is hoping to get the EU to agree to an exemption for major supermarket chains in Northern Ireland from the need to comply with the sea border checks, arguing that such big companies can be trusted to keep goods from leaking into the Republic, and easily caught if they were not.

Northern Ireland is the poorest part of the UK; any step to avoid additional costs being passed on to consumers who cannot afford them is positive.

The issue raises the question of whether the Irish Government’s arrangements will be equivalent in alleviating costs for businesses in the Republic.

Any uneven situation between north and south creates incentives for smuggling and bad actors, and competition to businesses that do everything above board.

Customs formalities will apply on all goods entering the whole island from Britain as of January, whether a deal is signed or not.

The European Commission warned companies last month to prepare, warning of a litany of disruption and change that lies ahead whether a deal is reached or not. This ranges from the end of mutually agreed certification, requiring new compliance for goods, to the fact that companies that include components from Britain may not be able to benefit from preferential treatment under the EU’s existing trade deals, and in any case will have to demonstrate the origin of goods.

In addition, all traders with Britain will need an economic operators registration and identification number issued by the EU.

The figure of £200 million for two years indicates the scale of cost that also faces businesses in the Republic from January, without the daunting prospect of tariffs if no deal is reached on top.