‘We’ve been oppressed for over 400 years; We should not still be fighting for this’

In Columbus, Ohio, anger over police treatment of African-Americans is simmering 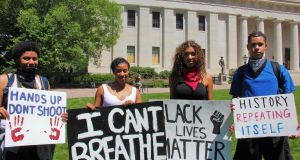 Every afternoon for a week, protesters have descended in their hundreds on the manicured lawn in front of the Ohio Statehouse in downtown Columbus. Some sit in small groups with hand-made signs lying at their feet. Others cheer when passing cars honk their horns.

All are gathered to demand justice for George Floyd, the African-American man who died at the hands of police officers in Minneapolis on May 25th.

Ohio’s capital city was one of the first outside of Minneapolis to see protests break out last Thursday. Dozens of businesses on streets surrounding the statehouse have boarded up their shopfronts, which now bear slogans such as “a badge doesn’t give you the right to kill” and “BLM”, an abbreviation for the Black Lives Matter movement that was spawned by a spate of officer-involved killings of African-Americans six year ago.

More than a week since Floyd’s death, anger with law enforcement simmers in Columbus.

“Why are we still fighting for this? We’ve been oppressed for over 400 years; we should not still be fighting for this,” says high school graduate Anisha Boone from Dublin, a Columbus suburb, who has come to protest with three of her friends.

Though still teenagers, Boone and her friends recount a series of incidents in which they believe their skin colour and that of family members resulted in unwanted negative attention. Boone recalls that several years ago her mother was stopped and handcuffed on the way to pick up her children from day care.

Sitting next to her outside the statehouse, Darby Adams (17) says her mother has been arrested and taken to jail for jaywalking. She herself has been called the “N” word to her face in school.

Other protesters talk about experiencing more subtle forms of racism. “At school, people say things like, ‘oh, I bet you’re really fast’ or ‘oh, I bet you can jump really high,’” says Jaiden Proper, another recent high school graduate. All three students live in an overwhelmingly white district that’s one of the wealthiest in the state.

In common with Minneapolis and many other northern US cities, Columbus received large numbers of African-Americans in search of work during the Great Migration from southern states during the early 20th century. A large proportion found themselves segregated into black-only neighbourhoods.

Today, many African-Americans and civil rights activists are angered that so little has changed since then, with violent law enforcement interactions with men of colour becoming a particularly combustible issue in recent years. Data compiled by Stanford University shows that police in Columbus stop African-American drivers at a rate almost twice that of white motorists.

A short drive west of downtown are Franklinton and Hilltop, neighbourhoods with large communities of African-Americans and other minorities. They are also some of the poorest districts in the state. In Hilltop, the median house price is less than $64,000 (€57,000). Residents of Franklinton in recent years were recorded as having a life expectancy of 60 – the lowest in the state and 30 years lower than Ohio’s highest rate.

Just because I’m black I gotta be ignorant, stupid? It’s not fair. It’s messed up. We always get the short end of the stick

“I’ve been called n****r by the KKK, I’ve been pulled over by the police three or four times,” says Tony Williams, a maintenance worker from just off Sullivant Avenue in Hilltop, a street infamous for drug activity, prostitution and poverty. He says that about a year and a half ago he was detained by police, beaten up and kept in a cruiser for six or seven hours close to the Greyhound bus station downtown, “even though I wasn’t the person they were looking for”.

“Just because I’m black I gotta be ignorant, stupid? It’s not fair. It’s messed up. We always get the short end of the stick.” Williams says he hasn’t attended any of the ongoing protests but believes they could fuel some change.

In sharp contrast to the position taken by US president Donald Trump, Ohio’s Republican governor Mike DeWine has sympathetically acknowledged the demonstrators’ anger, saying on Tuesday: “Protesters who are expressing outrage is not only understandable, it is very appropriate.” On Tuesday, the city of Columbus went as far as declaring racism a public health emergency.

Police officers in cities including Portland, Oregon; Boston; Philadelphia and Columbus have attempted to defuse the rage directed at them on the streets by kneeling with demonstrators.

But tensions remain high, with heavy-handed police responses seen in Washington DC, New York City and elsewhere. Six people have died in protest-related violence across the country over the past 10 days and several police officers have been shot or run over.

On Monday, authorities in Columbus announced a state of emergency and an indefinite nightly citywide curfew.

Back at the Ohio Statehouse, as more protesters gathered for the evening, soldiers standing next to a Humvee had expletives shouted at them by a driver in a passing car.

As demonstrators gathered round to hear a speech, a 21-year-old white man from Marion, Ohio, and whose face was covered except for his eyes, stood on the edge of the crowd with a fully-loaded AR-15 rifle draped across his chest. When asked if the weapon is loaded, he unclips the gun’s magazine to reveal dozens of live rounds.

“I think it is insane that I have to carry a weapon on me to feel protected. I’ve had to deal with the police a lot in my life and they’ve never been fair,” he says, declining to offer his name.