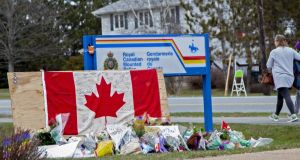 Canadian police had yet to determine a motive for the country’s worst mass shooting, as the death toll from the carnage in Nova Scotia over the weekend climbed to 23 from 19, the Royal Canadian Mounted Police (RCMP) said on Tuesday.

The shooting rampage has rattled rural communities in the Atlantic province, as investigators seek answers to questions such as how the gunman obtained an authentic police uniform and secured a police look-alike cruiser, both of which aided his easy movement during his 13-hour spree.

Memorials cropped up all over the province of fewer than a million people, featuring Canadian flags, flowers and illustrations of broken hearts. The Canadian Broadcasting Corp said the death toll included the suspect.

The RCMP said in a statement it was investigating the 16 crime scenes that were part of the murder spree, several of which included burnt-out homes. Police said there were also injuries in the attack, but did not say whether the death toll would rise further.

The gunman, 51-year-old Gabriel Wortman, who worked as a denturist, began his rampage late on Saturday. He was fatally shot by police at noon on Sunday at a service station.

The youngest among those confirmed killed so far was a 17-year-old, the RCMP said. Some of the victims were known to the gunman but others were not. A veteran police officer, a teacher and a nurse were among the dead.

Kristen Beaton, a nurse, was killed while working, according to a GoFundMe set up in her name. Beaton’s husband, Nick, told CTV News he warned his wife about the presence of an active shooter just before she was killed.

She was pregnant with the couple’s second child.

“We never got the chance to tell family,” he said. “We were going to tell them this week, she was going on vacation.”

The RCMP has been criticised for not alerting the public to the presence of an active shooter via the province’s emergency alert system and instead relying on its Twitter account, which had just under 91,000 followers at the time.

Nova Scotia RCMP Chief Superintendent Chris Leather told reporters on Monday the force felt it was a “superior way to communicate” the threat in the community, but said the force would look into the matter.

Nova Scotia premier Stephen McNeil said the province had not received a request from police for an emergency alert to be sent out. McNeil said the military was assisting in the RCMP’s investigation.

No details have been released about the type of gun used by Wortman or how it was obtained.

Bringing in stricter gun control measures was an election promise of Prime Minister Justin Trudeau’s Liberals in the October 2019 federal election, and he told reporters on Tuesday the legislation had been “almost ready to go” when the novel coronavirus crisis hit.

“The tragedy in Nova Scotia simply reinforces and underlines how important it is for us to continue to move forward on strengthening gun control in this country,” Trudeau said. “We will do that at the appropriate time.” - Reuters