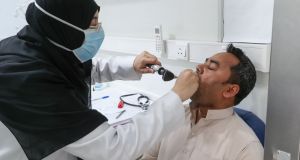 Saudi nurse checks a patient at a mobile clinic catering for the residents of Ajyad Almasafi district in the holy city of Mecca. Photograph: Bandar Aldandani/AFP

The Saudi authorities have imposed strict quarantine in Mecca to contain coronavirus contagion in poor neighbourhoods and migrant workers camps.

The number of cases confirmed in the city, which has a population of two million, has risen to more than 1,100. This is seen as disproportionate when compared to 5,862 cases among the total population of 30 million.

At the end of March, according to a Bloomberg report, 8,000 employees of Saudi Bin Laden, one of the kingdom’s largest construction groups, were quarantined after one tested positive and work was suspended on expansion of the grand mosque in Mecca, the Muslim world’s holiest city.

The Saudis have gone to great lengths to pre-empt the emergence and contain the spread of the virus in Mecca and Medina, Islam’s second-holiest city where the Prophet Muhammad lived and pursued his mission.

Muslims seeking to perform the year-round rites of the Umra, or “little pilgrimage”, in Mecca and visit the Prophet’s mosque in Medina were refused entry to the kingdom on February 27th, although the first case of Covid-19 was not identified until March 2nd.

Subsequently, prayers were suspended at the mosques in Mecca and Medina and Muslims were told not to book their travel and accommodations for this year’s Hajj, which is due to take place in July-August.

The legitimacy of the reign of the House of Saud could depend on how the kingdom deals with the virus. After staking claim in the 1960s to the medieval title, “Custodian of the Two Holy Mosques”, Saudi monarchs have been obliged to ensure the sanctity of the two mosques and to provide safety and security for Mecca and Medina.

Failure could undermine the House of Saud’s custodianship. Since Abdel Aziz Ibn Saud, founder of the dynasty, seized Mecca and Medina in the 1920s from the Hashemites who had ruled the holy cities from the 10th century, the reign of the House of Saud has been contested by some in the Arabian Peninsula and the Arab and Muslim worlds.

During the last two decades, for example, the House of Saud been challenged by religious purists protesting against corruption and calling for its overthrow, Iranian Hajj pilgrims demonstrating against the kingdom’s alliance with the US, and protests by Muslim governments after scores of pilgrims died in stampedes during the Hajj.

Since 2015, senior royals and a few brave subjects have queried the rule of crown prince Mohammed bin Salman, who has waged a deadlocked war in Yemen and seized power from nominated successors and cracked down on dissent. His underlings have been held responsible for the murder of Saudi journalist Jamal Khashoggi in the Saudi consulate in Istanbul. Bin Salman will be held responsible if the kingdom mismanages the coronavirus crisis and fails to provide protection for Saudi citizens from the pandemic.

The Saudi authorities report that foreign workers, a third of the population, account for 70-80 per cent of cases. Most are housed in crowded slums, a fact which the authorities acknowledge has contributed to the spread of the virus.

Saudi Arabia also hosts millions of migrants who have entered the kingdom to perform pilgrimages or for employment and have overstayed visas. Many subsist by taking up menial jobs that Saudis shun.

The virus has compelled the government to offer free treatment to all victims and to promise decent accommodation.