Royal couple write to editors of Sun, Daily Mail, Mirror, Express saying they will not deal with outlets 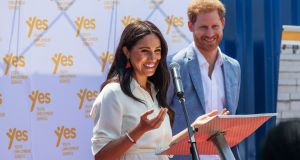 Meghan Markle is watched by Britain’s Prince Harry as she delivers a speech at the Youth Employment Services Hub in Tembisa township, Johannesburg, South African in October 2019. Photograph: Michle Spatari/AFP via Getty Images

Britain’s Prince Harry and his wife Meghan Markle have told the editors of British tabloid newspapers that they will never again deal with their outlets, in an unprecedented direct attack on a large part of the media that leaves little chance of repairing the relationship.

On Sunday night, the couple known as the Duke and Duchess of Sussex sent a letter to the editors of the Sun, Daily Mail, Mirror and Express saying that from now on they would not respond to any inquiries from journalists working for the outlets. Instead there will be a policy of “zero engagement”, except when necessary through the couple’s lawyers.

In a strongly worded attack, the couple said they refused to “offer themselves up as currency for an economy of clickbait and distortion” and accused the outlets of running stories that are “distorted, false, or invasive beyond reason”.

The move is designed to signal to the wider public not to trust any of the reporting about the couple carried by British tabloids.

It comes as Ms Markle prepares to take on the Mail on Sunday in a court case over its decision to print a letter she sent to her estranged father, with a virtual hearing scheduled to take place on Friday.

In the letter Harry and Ms Markle tell the editors that they believe a free press is a cornerstone to any democracy that can “shine light on dark places, telling stories that would otherwise go untold, standing up for what’s right, challenging power, and holding those who abuse the system to account”.

NEW: In a Sunday night letter, Prince Harry and Meghan Markle have written to editors of the four major British tabloids - The Sun, Daily Express, Daily Mirror and Daily Mail - promising never to work with them again, barring all access into the future. The letter in full: pic.twitter.com/V4CWc8jKu5

The message from their representatives says: “It is gravely concerning that an influential slice of the media, over many years, has sought to insulate themselves from taking accountability for what they say or print - even when they know it to be distorted, false, or invasive beyond reason. When power is enjoyed without responsibility, the trust we all place in this much-needed industry is degraded.

“There is a real human cost to this way of doing business and it affects every corner of society. The Duke and Duchess of Sussex have watched people they know - as well as complete strangers - have their lives completely pulled apart for no good reason, other than the fact that salacious gossip boosts advertising revenue.”

Addressing the editors directly, the letter continues: “With that said, please note that the Duke and Duchess of Sussex will not be engaging with your outlet. There will be no corroboration and zero engagement. This is also a policy being instated for their communications team, in order to protect that team from the side of the industry that readers never see.

“This policy is not about avoiding criticism. It’s not about shutting down public conversation or censoring accurate reporting. Media have every right to report on and indeed have an opinion on the Duke and Duchess of Sussex, good or bad. But it can’t be based on a lie.”

The couple’s representatives said they are happy to engage with other outlets, especially grassroots and new media outlets, “to spotlight issues and causes that so desperately need acknowledging. What they won’t do is offer themselves up as currency for an economy of clickbait and distortion.”

The couple’s total ban on dealing with the British tabloid media also applies to the Sunday editions of the newspapers and their associated websites. Harry and Ms Markle have previously made clear that they particularly object to the way stories from British newspapers about the couple are carried around the world, especially by the Daily Mail’s sister publication MailOnline - which has an enormous audience in the US - and its columnist Piers Morgan.

The pair recently relocated to California after quitting their formal royal roles, after a stay in Canada. Their relocation to North America was first revealed by the Sun at the start of the year, in a story that is thought to have angered the couple.

After losing their taxpayer-funded royal office their communications strategy will now be led by the US business Sunshine Sachs, which normally handles film and television stars, with only a single representative based in the UK. This will allow them to adopt image management techniques practiced by modern celebrities, communicating directly with the public through social media and carefully choosing selected outlets.

Harry’s separate legal claims against the parent companies of both the Sun and the Mirror for alleged historical phone hacking cases are also ongoing.

Longstanding royal correspondents have previously told the Guardian that the Duke of Sussex, whose mother, Princess Diana, was fatally injured in a car crash while being chased by paparazzi, has had an increasingly antagonistic relationship with the media. On one royal tour he told journalists covering it: “Thanks for coming, even though you weren’t invited.”– Guardian

Rescuers rush to save hundreds of stranded pilot whales in Australia 08:44
Trump to name US supreme court justice successor by Saturday 06:47
Trump sanctions against Iran to be followed by warning at UN 01:00
Bars and restaurants in England to close at 10pm under new restrictions 22:36
Karen Bradley says she regrets the ‘hurt’ she caused while NI secretary 21:43

1 Further restrictions to be considered in Dublin and elsewhere as Covid-19 cases rise
2 Dublin farmer discovers overnight rave on his land
3 Coronavirus: Almost half of Irish people believe the worst ‘is ahead of us’
4 Screen time linked to rising mental health issues in children – study
5 Investment in more detailed contact tracing needed to reveal key Covid-19 trends
Real news has value SUBSCRIBE