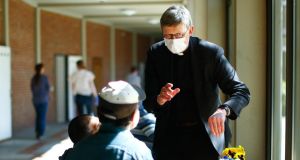 A week after Easter, as the coronavirus shutdown eases, German Christians are still waiting for their resurrection while the country’s Muslims face their first mosque-free Ramadan.

Chancellor Angela Merkel and Germany’s 16 federal state leaders have agreed to allow smaller shops to re-open and selected classes to return to schools from Monday. Hairdressers and other services will follow from early May.

But restaurants, bars and hotels remain shuttered, as are places of worship for religious services.

At a meeting on Friday, the country’s main religious leaders warned the Merkel administration of growing pressure from their congregations to restart services.

“It is of course necessary that not just shops open but also that churches can hold public masses,” said Cardinal Rainer Maria Woelki, archbishop of Cologne. “We tried to do our bit in the first phase [of shutdown] but now things are loosening the churches must be open for public masses.”

Lutheran leaders have struck a more conciliatory note. Bishop Heinrich Bedford-Strohm of Hanover, head of the Evangelical Church in Germany (EKD) federation of 20 Lutheran and reformed Protestant churches, said they “supported the efforts required of society to limit the spread of coronavirus”.

No progress emerged from Friday’s meeting at the federal interior ministry with state secretary Markus Kerber.

“The religious organisations made clear from the start that this is a grave incursion and we are agreed that we have to find a way towards normalisation of religious practice while adhering to health rules,” he said.

The issue would be a priority, added Mr Kerber, at the next meeting of Dr Merkel and regional leaders at the end of April.

German religious leaders are not sure if they can wait that long. With the holy month of Ramadan commencing next Thursday, the largest representative organisation for German Muslims has urged believers to pray at home.

“As difficult as it is to keep our mosques closed . . . it is our religious and civil responsibility to do just that in the current phase,” said Aiman Mazyek, head of the Council of Muslims in Germany (ZMD).

But the ZMD does not represent all Muslim communities in Germany and health officials are concerned that some mosques will allow services – in breach of health regulations.

Before Easter, Germany’s constitutional court dismissed an injunction request to strike down the restriction on religious services. In its ruling, the court said the ban was a “grave intrusion” on the constitutional right for religious practice that should be monitored, but was proportionate given the serious health risks posed by Covid-19.

As Germany begins to re-open kiosks and car showrooms, however, several constitutional lawyers have aired doubts about the constitutionality of an extended ban on religious services.

“I don’t think it is that important to buy a new car at the moment,” said Dr Andrea Edenharter to Der Spiegel, while hindering religious services that offer “spiritual experience and comfort” to people in times of crisis.

Prof Christian Hillgruber, head of the institute of church law at the University of Bonn, has predicted the “ban on masses will no longer have any basis as soon as school lessons are allowed”.

On Friday afternoon the first cracks appeared when the state of Brandenburg allowed outdoor gatherings of up to 20 people. With fine spring weather forecast for the weekend, officials said this could be seen as a gesture to religious communities.

Meanwhile Saxony has also allowed religious services with a maximum of 15 people present.