Brexit explainer: what could happen in UK parliament this week? 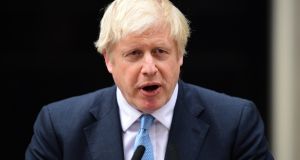 British prime minister Boris Johnson has issued rebel Tory MPs with an ultimatium, either support him or face an election. Photograph: Getty

This week has been billed as a potentially pivotal one for UK politics. So what could happen and when?

What are some backbench MPs trying to do?

Mr Johnson is insisting the UK must leave the EU on October 31st, with or without a deal, so MPs returning from their summer break on Tuesday will try to seize control of the House of Commons’ business agenda to push their legislation against a no-deal Brexit through parliament. In brief, backbenchers are trying to ensure Boris Johnson cannot remove the UK from the EU without a deal.

How are MPs aiming to take control?

A so-called rebel alliance – comprising Labour and most other opposition parties plus about 20 Conservative MPs – wants to secure parliamentary approval for a bill that would require Britain to seek a Brexit delay beyond Halloween if prime minister Boris Johnson fails to sign a withdrawal agreement with the EU.

They will aim to do this by invoking Commons’ standing order 24: a rule allowing MPs to ask for a debate on a “specific and important matter that should have urgent consideration” – in this case on the proposed legislation.

A debate can only take place if John Bercow, the Commons Speaker, gives permission and he is likely to do so.

Last week, he described Mr Johnson’s plan to suspend parliament for five weeks – from the second week of September until mid-October – as “a constitutional outrage”. Critics accused the prime minister of seeking to thwart MPs in their efforts to stop a no-deal Brexit.

As long as Bercow allows the debate on Tuesday, a vote will be held at the end calling for the legislation to be immediately scrutinised.

If the rebels win, they want the bill to go through all its Commons legislative stages at lightning speed on Wednesday.

The bill would then go to the House of Lords, where the rebels want it to pass through all its stages on Thursday and Friday – ahead of the possible suspension of parliament on Monday.

The rebel MPs – led by Labour’s Hilary Benn, plus former Conservative ministers Philip Hammond and David Gauke – on Monday published their bill that would force Mr Johnson to ask the EU for an extension to the Article 50 divorce process to January 31st if no withdrawal agreement has been approved by parliament by October 19th.

This date next month is significant: it is one day after an EU leaders’ summit where Mr Johnson said he hopes to finalise a new Brexit deal that involves significant changes to his predecessor Theresa May’s withdrawal agreement with the bloc.

How would the timetable play out?

Haste is the key. The plan would be for a vote on Tuesday on controlling the timetable and then a push to get the bill through all stages of the Commons and House of Lords before parliament is prorogued early next week, with speculation that this could involve the Lords sitting late at night or even over the weekend to get past government delaying tactics.

The debate – if allowed – is set to begin this evening and it will likely be 10.30pm before we know if the opposition has succeeded in seizing control of the parliamentary agenda.

Do the rebels have the necessary numbers?

David Gauke, another key rebel, has said it will be tight. However, about 15 or 16 Conservatives seem committed, despite the threat by No 10 to remove the whip from any dissenters. Even with the likelihood of a few Labour MPs voting with the government, this would seem enough.

How would Johnson respond?

Mr Johnson could seek multiple ways to get around the legislation, and the rebels have sought to limit his room for manoeuvre by stating in the bill that if the EU agrees to an article 50 extension other than January 31st, the prime minister must notify the EU within two days “that the UK agrees to the proposed extension”.

But Johnson has made clear that he regards Tuesday’s vote to take control of the Commons business agenda as a critical test and could move to call an election if the government loses.

By quickly seeking an election, the government would aim to ensure that the rebels’ bill is stopped in its tracks before it gets on to the statute book.

In these circumstances, Johnson is expected to argue that an election is needed to stop parliament tying his hands in the Brexit negotiations with the EU.

Could Johnson seek an election?

Not unilaterally. Under the Fixed-Term Parliaments Act 2011, it would require a two-thirds majority in the Commons. However, if the election were called for before October 31st, Labour would back the move, most likely along with other opposition parties, making the threshold straightforward. Many MPs would be expected to seek guarantees the election would take place before the Brexit deadline, with October 14th forecast as a possible date.

Who would win an election?

No one can know. Johnson would pitch the fight in openly populist terms as “the people” seeking to recover Brexit from the perfidy of remain-minded MPs, and hope to exploit Labour’s sometimes woolly position on the issue.

But he would face a twin threat from the Liberal Democrats taking remain Tory votes, and from the Brexit party, for which Nigel Farage will warn a new Johnson government would simply push through a reheated version of Theresa May’s deal, backstop and all.

We cannot tell who would win, but we do know it would be brutal. - Guardian / Financial Times