Simplistic view of Europe has pushed UK into Brexit abyss 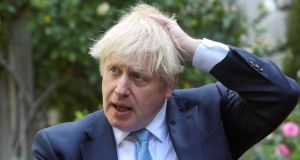 Britain’s prime minister Boris Johnson: ignorance and free-trading powerhouse delusions have made him and his Brexiteers unable to comprehend how Ireland can stand up to Great Britain. Photograph: Simon Dawson

You can predict the next action of Boris Johnson’s government quite easily. Simply imagine the approach which would show the least moral, intellectual or political understanding of the situation, and that is the one he will follow.

His strategy with parliament this week is to try and bully it into submission. He shows precisely no understanding of – or interest in – his opponents. He has no capacity to try and provide a compromise position. And he has overestimated his own leverage. It is, in short, a domestic rerun of the Brexiteer’s miscalculations over the backstop.

The Brexit debate often gets bogged down in technical details – parliamentary standing orders, customs procedures, principles of regulatory alignment. But at its heart there is an emotional battle taking place between two different views of the world.

The Remain side is generally comfortable with Britain exercising influence through a union of nations. They’re typically open to detail, strategically fairly modest and have an admiration for the competence of European leaders.

The Leave side harks back to a period of unchallenged British colonial strength, has a deep-seated hatred of detail, believes in the triumph of the will, and views European politicians as limp technocrats.

That world view has a long history, in which the current prime minister played no small part. When he worked as Brussels correspondent for the Telegraph between 1989 and 1994, he pioneered a new form of quasi-fictional reporting on nonsense news items like size limitations on condoms and bans on prawn cocktail-flavoured crisps.

At the time, it all seemed fairly jolly – an ultimately harmless form of instinctive Little Englander prejudice. But it helped cement a specific variant of the Eurosceptic world view, which took firm hold in what is now the Brexit electorate.

It was distinct from that of its fellow constitutional Eurosceptics, who were wary of legal overreach in the Maastricht Treaty and of the potential volatility of having a monetary union without any overarching fiscal or banking arrangements to complement it.

That kind of Euroscepticism was built on an understanding of the complexity of the European project, a grudging admiration for the legal and political achievements that had secured it, and a realistic assessment of Britain’s relative strength within it.

The Johnson brand of Euroscepticism was different. It despised complexity. It dismissed the complex reality of trying to create harmonised regulations for a single market in favour of hysterical offence at rules on noise levels for lawnmowers. It convinced itself instead that these rules were the deranged product of a class of European technocrats with nothing better to do but meddle in other people’s jovial prawn-cocktail-crisp-eating lives.

And, as a corollary of that, it viewed Britain as this immensely powerful, freewheeling, imaginative, free-trading powerhouse constrained by continental bureaucracy.

That world view helps explain the sense of bafflement and outrage with which hardline Brexiteers met the backstop negotiations. It was simply incomprehensible to them that tiny Ireland would be able to stand up to Great Britain. It was a reversal of basic historical laws. The idea that smaller nations gained strength by working within transnational organisations like the EU had not occurred to them, because their entire assumption about it was that it weakened member states.

The detail of the proposal prompted a similar reaction. They had not bothered to understand the manner in which a customs union eradicated tariffs, country-of-origin checks and customs declarations within its borders, nor the way single-market alignment eliminates regulatory checks. This was the world of detail, which was considered at best incomprehensible or at worst some sort of trick played by continental-types on common-sense British pragmatists.

There was no appreciation of the motives, moral commitment or intellectual capacity of their negotiating partners. And this type of myopic approach was not just unseemly. It also made them strategically ineffective.

A willingness to compromise was therefore replaced by a commitment to the absolute triumph of the will. If Brexiteers simply believed hard enough, all the details of other countries’ negotiating priorities and the technical requirements of trade would disappear. Brexit thought retreated into a kind of Jacobean cult, in which the content of its beliefs mattered less than its adherents’ undying willingness to commit to them.

When the backstop proposal was published, they simply could not understand what they were looking at, even though the broad outlines of what it would entail had been public knowledge for months. The emotional shock ultimately brought down Theresa May’s administration.

There was no appreciation of the motives, moral commitment or intellectual capacity of their negotiating partners

The same process is now playing out in parliament, as it enters its most important week in recent memory – and quite probably in our lifetime.

Johnson is threatening to remove the whip from Tory MPs who back rebel legislation against no deal. It is a spectacular sight. A prime minister with no majority is threatening to slash it even further if he does not get his way, seemingly unaware of the fact that this compromises his own position as much as it does their own.

Some people believe – probably rightly – that his ultimate aim is a general election, either in October or, if possible, just after the no-deal exit is delivered.

Quite why this would be a desirable outcome for him is unclear. His hardline position threatens his seats in Scotland and Conservative-Lib Dem marginals. There is little evidence suggesting he could make up those seats by flipping over Leave voters in traditionally Labour areas.

If no-deal happened, the resulting chaos would make it dramatically less likely that he could secure a majority. Although it is not clear that he has understood the evidence enough to recognise this.

The overwhelming lack of interest in detail and absolute commitment to the triumph of the will, infused with an elixir of unabashed nationalism, dominates the minds of those in No 10, forcing them into the same errors over and over again.

That error is based on a world view which took hold of the right of British politics for decades and which Johnson himself helped create. History has a cruel sense of humour.