Hundreds of thousands in Florida, Georgia and South Carolina ordered to evacuate 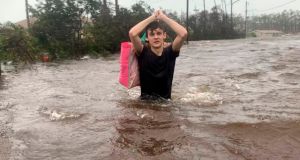 Matthew Aylen wades through waist deep water as he is rescued from his flooded home during Hurricane Dorian in Freeport, Bahamas. Photograph: AP

Hurricane Dorian, now a Category 2 storm, finally began to inch away from the Bahamas on Tuesday, after pounding the islands with unrelenting rain and winds as the United States waited to see what destructive path it would take.

The storm, which hit the northern Bahamas as one of the strongest storms on record in the Atlantic, was creeping northwest at just over 3km/h (2mph) north of Grand Bahama Island, having delivered powerful winds and constant downpours that flooded neighbourhoods, destroyed homes and killed at least five people.

The hurricane, now with 177km/h (110mph) winds, was expected to start turning north near Florida’s eastern coast by Wednesday, according to the US weather service.

It is highly unusual for a storm of Dorian’s magnitude to halt and hover over land, as it did in the Bahamas. Some residents were able to send video from the Abaco Islands, which took the full brunt of the hurricane. Stunned residents could be seen among crumpled cars, smashed homes, piles of debris and contorted trees. On Grand Bahama Island, floodwaters rose quickly in much of the main city, Freeport, trapping people on top of their houses. Messages pleading for rescue ricocheted over WhatsApp, but the wind gusts and racing currents made it impossible to reach many people.

Forecasters said the hurricane would move “dangerously close” to the Florida coast, beginning late on Tuesday and continuing through Wednesday evening. Then, it is expected to continue toward the Georgia and South Carolina coasts beginning late Wednesday. By the end of the week it is expected to be shadowing the coasts of North Carolina and Virginia.

Much of Florida’s eastern coast is also likely to be hit with dangerous storm surges. Rain bands and tropical storm-strength winds pelted Palm Beach County late on Monday and Tuesday morning. Authorities cautioned that residents should remain indoors throughout the day, and people appeared to be heeding the warning. Roads were almost entirely empty under dark gray skies and occasional whistling wind gusts.

In Jacksonville, the mayor, Lenny Curry, warned that the window to prepare for Dorian was quickly closing as the hurricane started to move. The city was deploying teams to rescue residents and clear roads as needed. “Today is your last day to get prepared,” said Mr Curry said. “This is no time to rest and think that everything’s going to be okay.”

Residents have begun evacuating from the coasts of Georgia and North and South Carolina, as meteorologists warned that Dorian would probably bring tornadoes, life-threatening storm surge and dangerous winds along the coasts of the three states into Thursday.

Farther north along the coast, the low lying and flood-prone city of Charleston, South Carolina, was also under an evacuation order. City officials began distributing sandbags at 8am on Tuesday and opened parking garages to give residents a safer place to store their cars.

In North Carolina, Governor Roy Cooper said he would issue an evacuation order for all of the state’s barrier islands, noting that some people had already begun to leave. “We’re still hoping this thing will move off to the east and won’t hit us too bad,” he said. “We know the forecast does bring it very close, if not on to the North Carolina coast. And so we’re going to be ready for it.” – New York Times