Islamists arrested in Gaza after policemen killed in bomb blasts 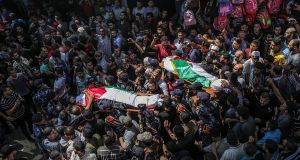 The explosions occurred an hour apart from one another at different locations in Gaza City. The Hamas authorities believe individuals linked to the Islamic State terror group were responsible.

In the first attack a bomber arrived at a police checkpoint on a motorcycle, which he parked and detonated, killing two policemen. A third officer died in the second bombing.

A Hamas security officer close to the investigation said a suicide bomber was involved in at least one of the blasts and it was possible that the other also involved a suicide attack.

The Israeli army denied any involvement in the incidents.

Radical jihadist groups believe Hamas is too lenient in imposing Islamic norms on society and some have links with Islamist militants operating in the Egyptian Sinai. Last year, the Islamic State Sinai branch declared war on Hamas, terming the group and its supporters “apostates”. Attacks have taken place in the past against Hamas security forces, triggering a violent crackdown against Salafi mosques and strongholds.

Reports from Gaza said one of the bombers was among a group of radical prisoners released recently by the Hamas authorities.

A spokesman for the interior ministry of Gaza, Eyad Al-Bozom, said that security forces were making progress in the pursuit of those responsible. “The sinful hands that carried out this crime will not escape punishment,” he said.

Hamas chief Ismail Haniyeh said that Gaza could “absorb” such incidents. The bombings would not undermine “the stability and steadfastness of our people”, he said.

The attacks came a day after Israeli warplanes hit a Hamas military compound in the northern Gaza Strip, in response to mortar fire into southern Israel.

Israel also announced it was reducing by half the fuel it transfers to the strip’s main power station, meaning a cut to Gaza’s already meagre electricity supply. Hamas condemned the Israeli action as collective punishment.

In a related development, Egyptian intelligence officials have warned Hamas representatives during talks in Cairo not to take part in any military conflict that might erupt between Israel and Iran and its Lebanese ally Hizbullah. According to the Egyptian reports, Egypt sent a similar message to leaders of the Islamic Jihad.

The United Nations Middle East envoy warned of increased violence in Gaza and the West Bank “and the threat of a regional escalation”.

“Israel must calibrate its use of force and use lethal force only as a last resort and only in response to imminent threats of death or serious injury and Hamas must prevent the indiscriminate launching of rockets and mortars towards Israel,” he said.