Bahamas revises down number of missing to 1,300 after Dorian

Authorities expect number of confirmed dead to rise significantly from 50 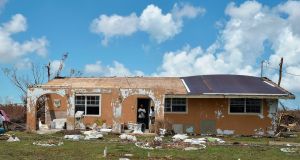 People look out of their destroyed home in East End on Grand Bahama island on Tuesday. Photograph: Getty Images

The Bahamian government now believes there are 1,300 people missing after Hurricane Dorian plowed into the islands, a sharp decline from the 2,500 listed on the missing registry a day earlier, a government spokesman said on Thursday.

The Bahamas National Emergency Management Agency on Wednesday had said the larger figure could include people staying at shelters. “The number of people registered missing with the Bahamas government is going down daily,” NEMA spokesman Carl Smith said at a news briefing.

The count fell after the government cross-referenced lists of people evacuated from hard-hit islands with its registry of missing people, Mr Smith said.

The official death count currently stands at 50 but Bahamian prime minister Hubert Minnis on Wednesday warned he expected that number to significantly increase.

“No living Bahamian has ever seen anything like this in their lifetime,” Mr Minnis said in a televised address, “but as horrible and vicious as Hurricane Dorian was, the bravery and resilience of the Bahamian people is even more powerful.”

Still, Mr Minnis acknowledged public frustration with recovery efforts, and said his government was “aggressively shredding the red tape” to improve its response.

The Bahamian government’s efforts to quantify the number of missing have been hampered by the many directions in which people fled.

McAdrian Farrington, whose five-year-old son and namesake went missing after a storm surge at his Murphy Town home in the Abacos Islands, said he feared that authorities would never find all of the missing.

“There’s a lot of people missing, not just my son,” he said in an interview last week. He did not criticise the government for its efforts, but said he believed it was too big a job for the Bahamas.

“You can’t just be looking in Abaco,” he said. “They’ve got to get boats and check the water. Get to the ocean.”

Government officials also had an fresh eye on an oil spill on the eastern end of Grand Bahama. Last week, a Norwegian oil company, Equinor, said that Dorian had blown the tops off several oil storage tanks on Grand Bahama and that oil had seeped out on site. The company said oil had been spotted in open waters and along . It said it was investigating the origin of that oil.

Bahamian minister of the environment Romauld Ferreira said the government would take care of the spill once the top priority – taking care of its people – was secured. “After lives have been settled and restored,” he said, “we need the environment to be restored.” – Reuters/New York Times