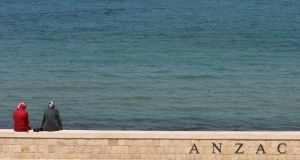 Australia said on Thursday it had received information that terrorists may be planning to attack a first World War commemoration service at Gallipoli in Turkey later in the month.

Foreign minister Julie Bishop said in a statement that Turkish authorities were aware of the information “and traditionally provide a high level of protective security around Anzac Day commemorations on the peninsula”.

Anzac Day, on April 25th, marks the first major battle involving troops from Australia and New Zealand in Gallipoli, Turkey in 1915. Hundreds of Australians and New Zealanders make a pilgrimage to the site every year for a military dawn service.

“The Australian government has received information to suggest terrorists may seek to target Anzac Day commemorations on the Gallipoli Peninsula,” Ms Bishop said in an emailed statement.

Dan Tehan, Australia’s minister for veteran affairs, said intelligence gathered did not indicate a specific plan, but rather a general aim.

Australia updated its travel advice for Turkey on Thursday, but did not change its statement that recommends visitors exercise a high degree of caution in the country and reconsider the need to visit Ankara and Istanbul.

Despite urging Australians to reconsider any plans to attend the annual event, Mr Tehan said he was confident Turkey would ensure sufficient security.