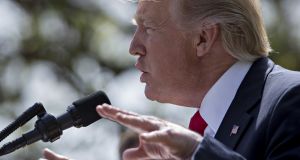 Us president Donald Trump has vowed to boost US military capabilities to counter the threat from North Korean missiles, hours before he is due to meet the Chinese leader, Xi Jinping.

In a telephone call on Thursday morning, Mr Trump told the Japanese prime minister, Shinzo Abe, that “all options are on the table” - including military action - to address provocations by North Korea.

The US president “made clear that the United States will continue to strengthen its ability to deter and defend itself and its allies with the full range of its military capabilities”, the White House said in a statement about the 35-minute call. “The president emphasised that the United States stands with its allies Japan and South Korea in the face of the serious threat that North Korea continues to pose.”

In a further sign of rising tensions on the Korean peninsula, South Korea on Thursday test-launched a ballistic missile that is capable of striking any part of North Korea.

Yonhap news agency cited a senior South Korean official as saying the missile, with a range of 800km, would act as a “strong deterrent” against provocations from the North.

Mr Trump is due to hold his first meeting with his Mr Xi on Thursday amid a myriad of foreign policy challenges, from Syria to North Korea.

Mr Trump is set to discuss the threat from North Korea with the Chinese premier during the highly-anticipated meeting between the leaders of the world’s two largest economies.

The two-day meeting at the president’s private members club in Palm Beach in Florida takes place just days after North Korea fired a missile into the Sea of Japan, the latest provocative act by the country.

Mr Trump said last week the US would be prepared to act alone to deal with the North Korean nuclear threat if help from China was not forthcoming.

White House officials said ahead of the meeting that Mr Trump would press China to do more to tackle the North Korean threat.

“North Korea is an area of urgent interest,” a US official said, adding that the president would impress upon Mr Xi “how important it is for China to co-ordinate with the United States, and to exert its considerable economic leverage to bring about a peaceful resolution to that problem.”

The White House believes that China - which it says is responsible for 90 per cent of North Korea’s external trade - can do more to influence Pyongyang.

Chinese officials sought to play down the significance of the timing of the recent North Korean missile test which was launched at 6.42 am local time on Wednesday just ahead of the much-anticipated meeting between Mr Trump and the Chinese leader. The medium-range rocket was launched from a land-base near Sinpo landed in the sea about nine minutes later.

The last missile test by the North took place while Mr Trump met with Mr Abe in February.

Concerns over North Korea have topped the Trump administration’s foreign policy agenda following warnings by former US president Barack Obama that the country could be developing missiles that would have the range to hit the United States. Mr Trump told the Financial Times in an interview published on Sunday that the US would act alone if needed.

“If China is not going to solve North Korea, we will. That is all I am telling you,” he said, adding that China has “great influence” over North Korea.

Trade is also likely to surface during Thursday and Friday’s meeting between the leaders of the world’s largest economies. Mr Trump, who has previously threatened to brand China as a currency manipulator and to revise what he sees as unfair trade practices which have favoured Chinese production over US manufacturing, warned of a “difficult” discussion.

While officials played down expectations of any resolution of trade divisions, they said Mr Trump would approach the discussion in a “candid and productive manner,” stressing “the importance of establishing an economic relationship that is fair, balanced and based on the principle of reciprocity.”

China is by far the biggest contributor to the United States’ estimated $500 billion trade deficit, exporting billions of dollars worth of goods into the US market each year.

The White House announced last week it was embarking on an analysis of its trade relationships with a number of countries with whom it has a trade deficit including China, Mexico, Germany, and Ireland.