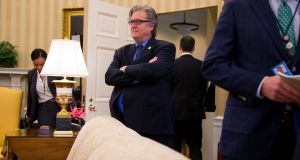 US president Donald Trump reshuffled his national security organization on Wednesday, removing his chief strategist, Stephen Bannon, from a top policymaking committee and restoring senior military and intelligence officials who had been downgraded when he first came into office.

The shift was orchestrated by Lt. Gen. H.R. McMaster, who was tapped as Trump’s national security adviser after the resignation of Michael Flynn, who stepped down in February after being caught misleading Vice President Mike Pence and other White House officials about his contacts with Russia’s ambassador.

McMaster inherited an organizational scheme for the National Security Council that stirred protests because of Bannon’s role. The original setup made Bannon, the former chairman of Breitbart News, a member of the principals committee that typically includes Cabinet-level officials like the vice president, secretary of state and defense secretary. The original order also made the chairman of the Joint Chiefs of Staff and the director of national intelligence only occasional participants as issues demanded.

A senior White House official presented the move as a logical evolution, not a setback for Bannon. He had originally been put on the principals committee to keep an eye on Flynn and to “de-operationalize” the NSC after the Obama administration, this official said on condition of anonymity to discuss internal dynamics. This official said that process had been completed.

But the reorganization seemed a clear victory for McMaster as he struggles to assert control over national security. In addition to the changing membership of the principals committee, the new order also puts the Homeland Security Council under McMaster rather than making it a separate entity, as Trump’s original order had done.