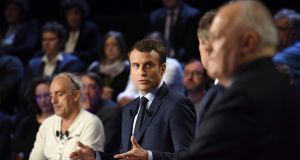 The presidential debate that ended at 12.40am on Wednesday may not change the results of the first round of the election on April 23rd, but it broke records. For the first and only time, 11 candidates debated over four hours, with each speaking an average of 17 minutes.

The free-for-all offered six “little” candidates, whom polls credit with between 0.5 and 4 per cent of votes, a chance for revenge. They had nothing to lose, and made the five “big” candidates squirm. It felt like a sometimes amusing, disputatious French dinner party.

Marine Le Pen, the leader of the extreme right-wing Front National (FN) and the centrist Emmanuel Macron are tied for first place at 25 per cent, though polls indicate Macron would defeat Le Pen by a wide margin in the May 7th runoff.

The conservative former prime minister Francois Fillon, who has been crippled by a series of corruption scandals, is in third place at 17.5 per cent. The far left candidate Jean-Luc Mélenchon, at 15 per cent and rising, hopes to overtake Fillon.

The leading candidates often appeared to wonder what they were doing on the same television stage with what might uncharitably be called the lunatic fringe. France is doubtless the only western country where three Trotskyists could figure on the presidential ballot. They used vocabulary from a bygone era, terms such as “general strike”, “the turpitude of finance” and “big money”.

One of the Trotskyists, Philippe Poutou, the head of the New Anti-Capitalist Party, introduced himself as a worker from the Ford factory in Bordeaux. He and Nathalie Arthaud, the head of Workers’ Struggle, were the only candidates to hold “real jobs”, Poutou said.

Wearing a T-shirt and speaking fast and angrily, Poutou denounced “the ultra-rich, the indecently rich, this capitalist system”. Macron, the former economy minister and former executive at the Banque Rothschild who appears likely to be France’s next president, looked on with alarm.

In the event, Poutou attacked Fillon and Le Pen, not Macron. A series of scandals involving Fillon’s hiring of family members and gifts of bespoke suits were “a feast”, Poutou said, accusing Fillon of “dipping into the till”. Fillon threatened to sue the factory worker.

Poutou turned his tongue against Le Pen, who, he said, seemed to think that being anti-European made it all right to steal EU money. He attacked her for hiding behind her immunity as an MEP in refusing to answer a police summons regarding the use of EU funds to pay party workers.

In what was labelled the “scud” of the evening, Poutou added: “Us, when we get summoned by police, we don’t have any workers’ immunity, so we go.” The audience applauded.

Colourful as they were, the “little” candidates raised important questions. Poutou’s denunciation of the state of emergency and his demand that police be disarmed were the only reference to the authoritarian drift in French society since jihadist attacks started in 2015.

Arthaud noted that the richest French individuals hold fortunes in the €20-30 billion range, and that those fortunes increased by 18 per cent in one year. “Monsieur Fillon criticises the privileges of railway workers while he helps himself to . . . let’s say largesse. It’s shocking,” said Arthaud, a teacher. “When you’re a worker, or unemployed, you have to account for yourself every day. Inspectors come. If a cashier in a store keeps a coupon, she is fired.”

Francois Asselineau, a retired civil servant, reproached Le Pen for wanting to waste time in negotiations and a referendum on leaving the euro and the EU. He would invoke article 50 of the Lisbon Treaty immediately, Asselineau promised, for the fastest possible “Frexit”. France gives €23 billion to the EU annually, but receives only €14 billion in return, he added.

Le Pen lost most in the debate. Asselineau made her look soft on Europe, while the Trotskyists stole her mantle as defender of “the people”.

Macron fared better than Fillon and Le Pen, though Asselineau’s remark that he “always agrees with everybody” was devastating.

Macron claimed to “carry Europe in [his] heart,” and was the only one to defend the EU. Others opposed the EU’s directive on detached workers, which allows employees to work in another country while paying lower social contributions at home.

Macron noted that the directive enables 300,000 French people to work elsewhere in the Union. And he attacked Le Pen’s advocacy of nationalist protectionism, saying that nationalism means war.

The candidates were divided between those who want to reduce the cost of labour, namely Fillon and to a lesser extent Macron, and the others, who want to raise wages. They were similarly divided on cutting back the civil service. “You’re going to ruin the country,” Fillon warned Hamon.

Mélenchon clashed with Le Pen over her intention to enshrine protection of France’s “historic and cultural heritage” in the constitution. It boiled down to allowing Christmas mangers in town halls. “Sixty per cent of French people have no religion. Leave religion out of it!” Mélenchon pleaded.

The debate ought to provoke soul-searching about the way France vets presidential candidates. At present, anyone who gathers endorsements from 500 of the country’s 36,000 mayors can stand for the country’s highest office.

The public television station France 2 on Wednesday abandoned plans for a second debate involving all 11 candidates. It was to have been held three days before the first round.