Focusing on Xi, Chinese communists seem to be moving from collective leadership era 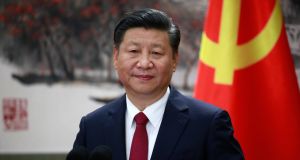 Chinese president and member of the standing committee of the Politburo Xi Jinping: “We must continue to rid ourselves of any virus that erodes the party’s fabric.” Photograph: How Hwee Young/EPA

Five years after Xi Jinping led China’s top leaders on to the carpeted stage in the Great Hall of the People, the Communist Party boss is back with a new set of elite cadres. This time, the president’s position at the helm of the party looks unassailable.

The team of seven men in dark suits strolled out into the East Hall and stood impassively before a giant ink-and-brush painting showing the Great Wall where it meets the sea, and inscribed with a poem, Beidaihe Waves, written by founding father Mao Zedong in 1954.

After the week-long party congress in which Xi became the focus of power in China, only Mao is higher than Xi in the pantheon of leaders.

The congress enshrined “Xi Jinping Thought” into the party’s charter. In the intervening half-decade, Xi has grown in confidence, and there is an added heft to his delivery as he reiterates his promises of a “new era” of Chinese global influence, an end to corruption, and a decent living for everyone in a clean environment.

“We must continue to rid ourselves of any virus that erodes the party’s fabric, make great efforts to foster a healthy political environment of integrity, and generate waves of positive energy throughout our party,” he told gathered journalists.

By focusing on Xi and centring the party’s destiny around him, the communists appear to be moving away from the era of collective leadership, begun by the financial reformer Deng Xiaoping after the excesses of the Mao era and the cult of personality the Great Helmsman built up around himself.

All of the standing committee were born after the 1949 revolution. The new members will be too old to succeed Xi when his term ends in 2022, so he has discretion to appoint a successor at his leisure in coming years, or even choose to extend his tenure beyond the customary 10 years.

The big favourites to succeed him in what’s known as the sixth-generation of leaders, Guangdong party secretary Hu Chunhua and Chongqing party boss Chen Miner, are in the wider 25-member Politburo, the next echelon below the standing committee. Each could still be anointed successor but will have to bide their time.

Xi’s political rivals have fallen by the wayside en route to the Great Hall. In July, one of the top contenders, Sun Zhengcai, a popular party boss in Chongqing, was removed and charged with corruption.

Yet again there was no place for a woman on the standing committee. Indeed only 10 of the 204 members of the central committee of leaders in China are women.

There were eyebrows raised when Xi thanked reporters for their coverage of the congress and called for constructive criticism. “We do not need lavish praise from others. However, we do welcome objective reporting and constructive suggestions,” Xi said.

The Communist Party loves anniversaries, and Xi’s next five years will be filled with big dates, including the 100th anniversary of the founding of the party in 2021, the 70th since the foundation of the People’s Republic and the 40th since China began the process of reform, in 2018.

“Forty years of reform and opening-up has made it possible for our people to lead decent, even comfortable lives,” he told the reporters. “It’s my conviction that the great rejuvenation of the Chinese nation will become a reality.”