What Kyrgyzstan lacks in infrastructure, it makes up for in hospitality

Naryn Letter: Mistaking a wake for a market, I’m gifted with an endless supply of food 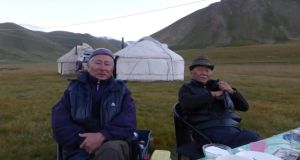 Melis and Arslanbek Chormonov at the Bosogu yurt camp at Köl-Suu. The brothers want to attract more travellers from Europe and beyond to Kyrgyzstan. Photograph: Joseph O’Connor

The sun is retreating behind the snow-capped Tian Shan mountains, which surround our yurt camp in the Naryn province of Kyrgyzstan. It’s here that I have a chance encounter with two Kyrgyz brothers whose lives are now very different to the ones they led when the Central Asian country was under Soviet rule.

Kyrgyzstan – along with its other “Stan” neighbours – is something of a mystery to people in the West.

Phonetic challenges aside, the country doesn’t register on most people’s radar. One recent exception came in July, when a news story reached these shores surrounding a picture that Aliya Shagieva, the Kyrgyz president’s daughter, posted of herself on Instagram breastfeeding her baby.

The image sparked a lively debate in the country home to over 5.7 million people, 75 per cent of whom are Muslim. But breastfeeding aside, coverage of Kyrgyzstan has been sparse on the western front.

Melis and Arslanbek Chormonov are hoping to change that. Now approaching retirement age, the brothers once worked as scientists for the government during the communist era. The pair’s position placed them among a small group of elites who were able to travel freely and extensively in the 1970s and 1980s. After the fall of communism, however, the brothers initially struggled to find their place in the newly established Kyrgyz Republic.

Having identified an opportunity in the country’s fledgling tourism industry, the Chormonovs established a new tourism academy in the capital of Bishkek five years ago. They would use their research and globetrotting knowledge to teach Kyrgyz students how to make their mark in tourism and hospitality. Today, the academy has upwards of 500 students, with graduates moving abroad to gain the skills and experience to bring back home.

Our paths crossed as we explored the region around Köl-Suu, an alpine lake located close to the Chinese border; the brothers examining the tourism potential it holds having read about the destination in an Italian blogger’s post. As we sip tea together, it is not long before Melis – incidentally an acronym for Marx, Engels, Lenin and Stalin – reaches for his smartphone and records our conversation; a case study to present to his students. He wants to know what I believe Kyrgyzstan needs to do to attract more travellers from Europe and beyond.

The Chormonov brothers’ enthusiasm appears to be just one small part of a concerted effort in Kyrgyzstan to help kickstart the country’s tourism sector and capitalise on what it has to offer – unspoiled natural beauty for the outdoors lovers, a rich nomadic tradition to interest the culturally inquisitive, and remnants of a Soviet era for the political history junkies.

I witness similar enthusiasm in the town of Naryn when I encounter Gulira Kenjekaraeva, co-ordinator at CBT Naryn, part of a community-based tourism network which aims to promote sustainable tourism and improve the conditions of people living in remote mountain regions. It’s an ambitious model given that the tourism industry is in its infancy, employing the services of locals – anyone from drivers helping travellers navigate potholed terrain to nomadic families welcoming tourists into their yurt for some fermented mare’s milk.

Kenjekaraeva was instrumental in setting up the first tourist yurt camp at Köl-Suu. “Nowadays, if you mention Kyrgyzstan, they immediately ask ‘Kazakhstan? Where is Kyrgyzstan’?” she tells me in her office as she grapples to control a group of boisterous young Israeli tourists.

“Kyrgyzstan is working very hard to improve its services because here, services are still simple. But tourists accept us as we are, and my vision is that in 10 years’ time our tourism services will have improved greatly.”

Undoubtedly, Kyrgyzstan still has a long way to go. This year it was placed 115th in the World Economic Forum’s Travel & Tourism Competitiveness Report behind neighbours Tajikstan and Kazakhstan. But where the country falls short on infrastructure, it makes up for in hospitality, something I get a taste of first-hand in the most unlikely of manners.

While driving along the vast Lake Issyk-Kul in the north, I notice a large crowd gather in a nearby village. Curiosity gets the better of me and I pull over to take a closer look. Once spotted by the locals, I am shepherded into a nearby house.

Despite the language barrier, it’s not long before I realise that I’ve become entertainment for mourners at a funeral. Guided to a seat beside the bereaved, I’m gifted with an endless supply of food and spend the next 30 minutes negotiating my exit.

While it might not be the most comfortable predicament in Kyrgyzstan to find oneself in, it’s a unique insight into the level of hospitality awaiting those foolish enough to mistake a wake for a market. Unlike the unfortunate soul whose ceremony I attended, Kyrgyzstan’s tourism industry is alive, and gaining momentum.