What do we know about Las Vegas gunman Stephen Paddock?

Benjamin Paddock, the father of Stephen Paddock, the man identified as the Las Vegas shooter, was a known criminal and on the FBI's Ten Most Wanted Fugitives list from 1969 to 1977. Video: Reuters 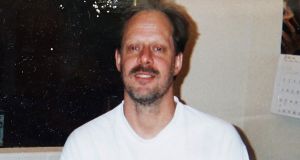 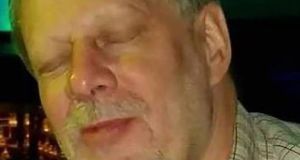 Image widely circulating on social networks and US media identifies Stephen Paddock, the gunman who killed 58 people and injured over 500 during an open air concert in Las Vegas. Photograph: AFP/Getty Images 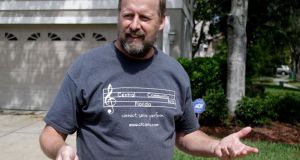 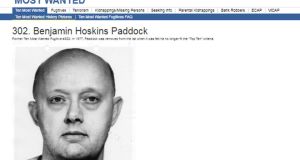 Undated handout issued by the FBI of an archival web page from their most wanted list, of Benjamin Hoskins Paddock, father of Stephen Paddock. Image: FBI/PA Wire 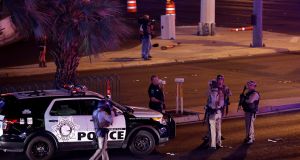 Authorities named Stephen Paddock as the suspected perpetrator of the deadliest mass shooting in US history, killing at least 58 people and injuring more than 500 others at a concert in Las Vegas. Paddock opened fire from a 32nd floor room in the Mandalay Bay Hotel and then killed himself as police approached. He was found with more than 10 rifles.

A 64-year-old resident of Mesquite, Nevada, a small town about 80 miles outside of Las Vegas, Paddock lived in a retirement community and, according to the Washington Post, liked to gamble, listen to country music and go to concerts in Las Vegas.

He had been living with a female companion named Marilou Danley. Relatives and neighbours said he and his companion drew little attention to themselves.

Paddock had not displayed strong political or ideological beliefs in their interactions with him.

Police told CBS that they had spoken to Ms Danley and that she was overseas at the time of the shooting and is not suspected of involvement. Paddock was a licensed hunter and small aircraft pilot.

He is the son of Benjamin Hoskins Paddock, a bank robber who was on the FBI’s ten most wanted list until 1977.

ABC reported that Stephen Paddock appeared to have worked as an accountant, at one point affiliated with the company that would become Lockheed Martin. The defence contractor released a statement to ABC: “Stephen Paddock worked for a predecessor company of Lockheed Martin from 1985 until 1988 . . . We’re co-operating with authorities to answer questions they may have about Mr Paddock and his time with the company.”

Paddock’s ex-wife, who now lives near Los Angeles, told Los Angeles police that they had divorced 27 years ago after being married six years. They had no children.

What do people who knew him say?

Paddock spent several years living in Mesquite, Texas, an eastern suburb of Dallas. From 2004 and 2012, he was associated with several properties in the city and had a Texas driver’s license that has now expired, according to a spokesman for the Mesquite Police Department.

Speaking to FloridaToday in Viera, where Paddock had a home, a neighbour, Sharon Judy, described Paddock as “a normal man.”

Lombardo described Paddock as 'lone wolf' who had smashed the window of the hotel with a hammer-like device before starting to fire on the crowd. A motive for the horrific attack remained unclear

“He seemed normal, other than that he lived by gambling,” she said. “ He was very open about that. First time we ever met him, he handed us the key to the house and said, ‘Hey, would keep an eye on the house, we’re only going to be here every now and then.’”

The Dallas Morning News reported that Paddock lived and worked as a manager and owner of an apartment complex in the Dallas suburb of Mesquite beginning in 2000. A resident, Priscilla McBride, said that Paddock roamed the apartment property, casually talking to residents. He moved away several years ago, she said, and they had not seen each other since. “I thought, it couldn’t be,” she said. “You would have never thought he would be killing people. You just never know.”

Did Paddock have a criminal history?

No. Las Vegas Sheriff Joe Lombardo said Paddock had no “derogatory” interactions with police, beyond a minor incident years ago.

Lombardo described Paddock as “lone wolf” who had smashed the window of the hotel with a hammer-like device before starting to fire on the crowd. A motive for the horrific attack remained unclear. “I can’t get into the mind of a psychopath at this point,” Lombardo said. “It wasn’t evident that he had weapons in his room,” the sheriff said. “It has been determined that he had employees going to and from from his room, and nothing nefarious was noticed.”

A spokesman for the Mesquite Police Department said there was nothing remarkable about Stephen Paddock’s home, in a cul-de-sac in a “fairly quiet” retirement community. He described the area as “just a regular neighbourhood” and added that nothing was “out of the ordinary” when police searched the home Monday.

The spokesman said some weapons and ammunition were found in the house but would not specify the type or quantity. The Mesquite Police Department said they had no interactions with the couple, including traffic stops.

Why aren’t authorities calling the attack an act of terrorism?

Authorities have to “establish what his motivation was first”, Mr Lombardo said. “There’s motivating factors associated with terrorism other than a distraught person just intending to cause mass casualties. Before we label with that, it’ll be a matter of process.”

Paddock’s brother, Eric who lives in Orlando, Florida, told CBS his brother had “no religious affiliation, no political affiliation – he just hung out”. He was “not an avid gun guy” at all.

The brother also told the station he knew Paddock had handguns, but he did not own “machine guns.” “Where the hell did he get automatic weapons? He has no military background or anything like that,” the brother said. “When you find out about him, like I said, he’s a guy who lived in a house in Mesquite and drove down and gambled in Las Vegas.” He said he last spoke to his brother when Stephen called to ask how the family had fared during Hurricane Irma, which struck Florida in September. “He texted me to ask about my mom after the hurricane”.

He added that he and his family were “shocked, horrified” by the news.

Eric Paddock also said his brother “was nice to my kids when they went out to Vegas.” He added: “He didn’t have active employment. His life is an open book. It’s all in the public record. He went to college, he had a job. You’ll find out.”